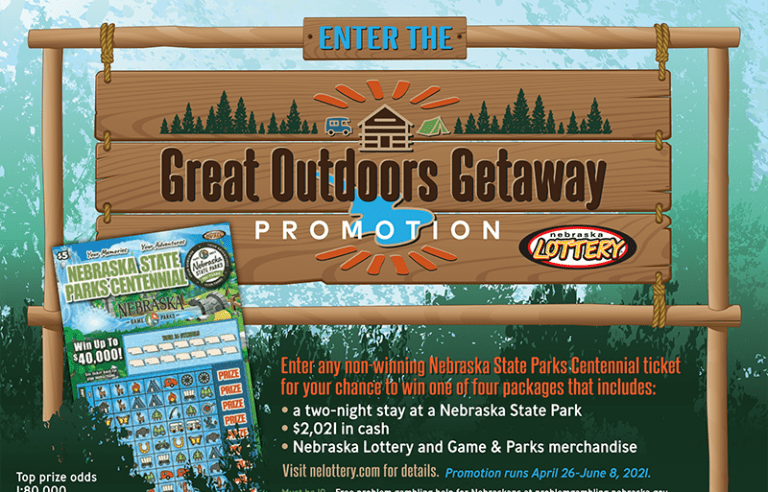 “We have had a relationship with Nebraska Game & Parks for many years,” explained Jill Marshall, Marketing Manager, Nebraska Lottery. “Nebraska Game & Park projects have been the recipients of many grants from one of our beneficiaries, the Nebraska Environmental Trust.”

The Nebraska Lottery often features their projects to show examples of where Lottery beneficiary money goes. “A couple years ago we found out 2021 was going to be 100th Anniversary of the Nebraska State Park System so we started planning a Scratch ticket to celebrate with them. From this, the Nebraska State Parks Centennial ticket was created,” said Marshall.

The two agencies worked together to create a major prize package for the tie-in second chance promotion. “Nebraska Game & Parks is providing two-night cabin stays and glamping cabin stays as part of our second chance promotion, the Great Outdoors Getaway, for this game. They are also providing NEBRASKALand magazine subscriptions and State Park passes along with swag that will be included in our second-chance packages. They are sharing news of our ticket launch and promotion in their marketing materials,” said Marshall.

In terms of sales performance, expectations are high. “This game has a print run of 240,000, $5 tickets which is $1.2 million in potential sales. We anticipate the game selling out before 12 weeks, so easily over $100,000 per week,” said Marshall.

There are several reasons for why the game should be a success. “This play style, which IGT calls synchronized, has been one of our most recent new play styles and has been a hit with our players,” said Marshall.

The lottery can also point to previous success with partnership games. “In the past we have partnered with Nebraska’s Tourism Department and sold a ticket called Nebraska Passport to help promote their summer Passport program. A couple of years ago we produced a ticket to celebrate the 150th Anniversary of the Nebraska State Fair. And we just launched a ticket called Brew Bucks that is a partnership with the Nebraska Craft Brewer’s Guild,” she said.

The game theme should also appeal to outdoor enthusiasts. “Nebraskans’ love of the outdoors will have players gravitating towards the game,” speculated Marshall.