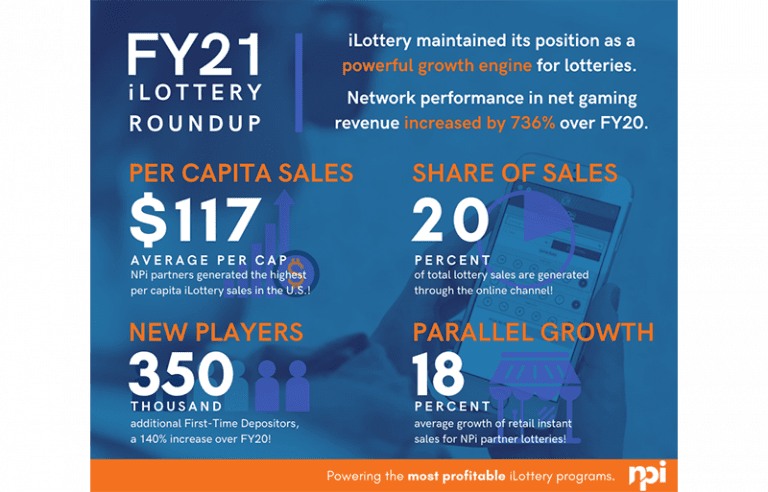 It will come as no surprise that iLottery performance exceeded expectations in FY21. With consumers continuing to migrate to digital for everything from movies to groceries and beyond, iLottery maintained its position as a powerful growth engine for lotteries.

“For NPi’s lottery partners that closed FY21 on June 30, triple-digit-growth was the theme across all primary key performance indicators. In states with full iLottery programs, NPi’s partners generated the highest per capita iLottery sales in the U.S., averaging $117,” said Liz Siver, General Manager, NeoPollard Interactive (NPi).
“NPi’s sole focus on driving revenues for good causes through the online channel resulted in over $205 million in net gaming revenue generated by lotteries that closed FY21 this summer, a 736% increase in network performance compared to FY20,” Siver added.

Double jackpots at the midway point in the year supported acquisition goals, in many cases exceeding acquisition targets for the entire year during the eventful run. “At the close of the year, over 350,000 new players, or First-Time Depositors, were acquired, an increase of over 140% compared to FY20,” said Siver.

The eInstant category was the primary driver for this growth, which is typical considering that the eInstant category produces over 90% of iLottery revenue. As a key contributor to top performing iLottery programs, NPi’s Studio delivers a broad portfolio of engaging game themes and mechanics to attract and retain iLottery players.

iLottery represents a significant share of a lottery’s annual portfolio. “In NPi’s network, nearly 20% of total lottery sales are generated through the online channel, up 67% compared to FY20’s average,” said Siver.

Alongside the impressive performance of iLottery this year, the experience of NPi’s partner lotteries, and all U.S. lotteries that have introduced iLottery, prove that the retail channel thrives even when iLottery performance breaks new records. “Retail instant sales improved by an average of 18% across NPi’s network this fiscal year, reinforcing that iLottery is a strong complement to retail,” reported Siver.