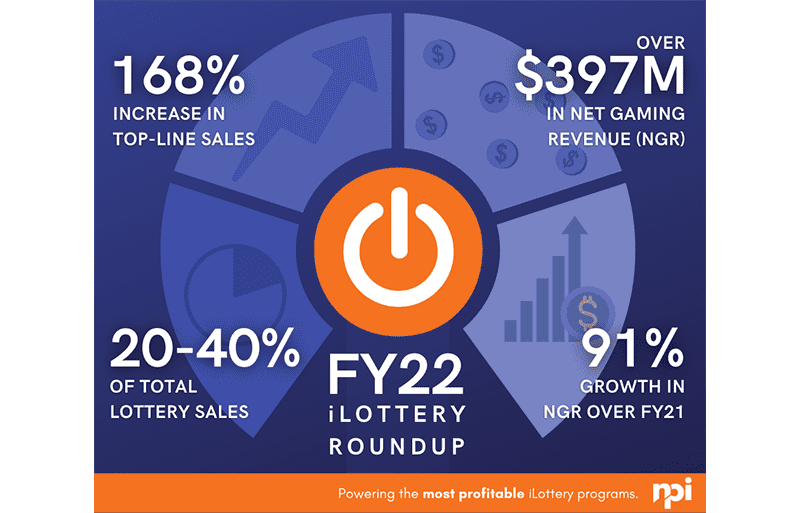 FY22 results cement iLottery as a powerful growth engine. For NPi’s partners that closed FY22 on or before June 30, NPi’s network experienced triple-digit increases — 168% in topline sales — positioning NPi as the market leader with 69% of U.S. iLottery market share. Average per capita iLottery sales across the network exceeded $297. Directly contributing to enhanced returns to state budgets and good causes, FY22 programs generated over $397 million in net gaming revenue — growth of 91%!

Retail performance in states with iLottery continues to grow. Recent results show that for NPi partners, total retail sales grew by 33% compared to retail sales growth of 20% for the U.S. industry. iLottery has become a prominent contributor to overall lottery sales, driving 20-40% of total annual lottery sales for NPi’s partners.

What is the next wave of growth for iLottery?

Recent research, commissioned by NPi, investigated lottery markets and players to uncover actionable insights.
Player participation across channels varies vastly, with jurisdictions reporting playership of 50% through retail and 20% or less through iLottery. The report revealed that only 45% of players were aware of the availability of lottery games online. This data serves as an indicator for the potential market — player awareness is key to driving iLottery success.

iLottery players cited ease of use, fun, accessibility, and security as motivators for play, while non-iLottery players reported motivators of security, rewards programs, and better odds. Of all lottery players surveyed, 51% stated they would be open to playing iLottery in the next year — revealing extraordinary potential for iLottery growth.
With security concerns identified as the top barriers to play online, lotteries have a competitive edge and are well-positioned to ride the next wave of growth. As secure, government-operated programs, iLottery offers players the highest level of security and credibility when gaming online.

One of Our Focus Areas Is Value