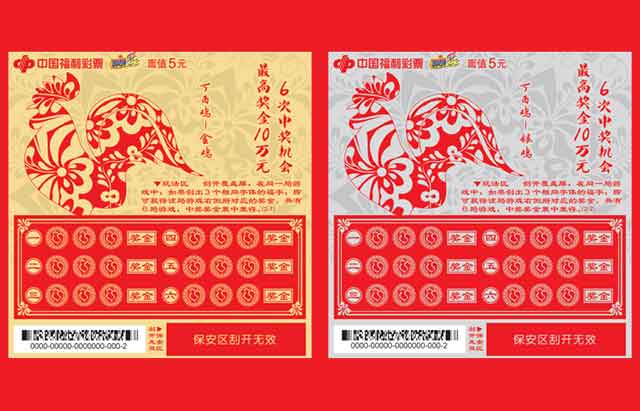 Red is the color of Chinese New Year. You see it everywhere. It symbolizes happiness, good luck and virtue. The excitement begins before midnight as celebrants prepare to usher in the New Year. A red envelope, which typically contains money but can also bestow luck in the form of a lottery ticket, is gifted to family and friends.

Asian lotteries typically produce artistic New Year tickets depicting the animal associated with the year. 2017 is the Year of the Rooster, according to the Chinese 12-year animal zodiac cycle. “The 5 Yuan ‘Gold Rooster and Silver Rooster’ ticket offers a top prize of 100,000 Yuan,” said Bin Peng, International Relations, CWL. “The ticket has two images of the Gold Rooster and the Silver Rooster which represent the balance and harmony of the yin-yang concepts of Chinese philosophy.”

The 10 Yuan “Rooster Crowing Brings Fortune” ticket offers a top prize of 300,000 Yuan. “It features four images of ink wash paintings which represent four seasons of Spring, Summer, Autumn and Winter. It is designed to target players who are interested in Chinese traditional paintings and Chinese calligraphy,” said Peng.

Chinese lottery players like to collect the tickets. “Generally, we only launch the tickets for the Chinese New Year,” said Peng. “Chinese zodiac animal tickets are unique, attractive and well-designed. We asked famous artists to design the tickets for us. The tickets are very popular especially for lottery collectors.”

Red envelopes are available at lottery retailers. “As part of promotion, the retailers will give away a red envelope for the lottery tickets so players can send the tickets to their family members and friends as a New Year gift.”

CWL created special posters to advertise Chinese New Year tickets at retailers and promote the red envelope. “We asked our provincial welfare lottery centers to conduct marketing campaigns and promotions within their own jurisdictions,” said Peng. “[There is] no national marketing campaign. Each province developed its own campaign. Some provinces, like Sichuan and Shanxi, offer players another chance to win. Players scan a QR code on each ticket and then enter a special draw which provides winners with non-cash prizes like sports wearable bands or even a car.”

The holiday scratchers produce big sales for CWL. “The combined sales for 2016 Year of the Monkey tickets were 864,213,555 Yuan,” said Peng.

The California Lottery has been selling a Lunar New Year ticket for many years.

Supporting its $1 “Year of the Rooster” Scratchers game, the California Lottery’s “Good Fortune” door guard poster is displayed at retail in Asian consumer markets as well as in support of two experiential events. The door guard poster cleverly incorporates the Rooster image to become one with the
Chinese character for fortune and combined with other lucky symbols completes creating the character for “Good Fortune.” Placement of the door guard is a cultural tradition to either ward off evils or to welcome positive energies. The California Lottery’s symbolizes that the Year of the Rooster will be a year of endless good fortune.

The holiday-themed “gift” scratcher is popular with players. “Australia’s community is hugely diverse which is an exciting opportunity as well as a challenge for the Lott, Australia’s Official Lotteries,” said Jill Every, GM Marketing, Lotteries, Tatts Group Lotteries. “In 2016, more than 30% of the Australian adult population were born overseas and their origins and values vary widely. Gifting is a large part of our Lotteries product strategies a nd seasonal events present further opportunities for ticket design and promotion. As a business, we’re working to maximize this commercially through core and emerging channels as well as potential partnerships. While the origin of seasonal tickets might be inspired by a specific culture, it has to be accessible and have broad appeal rather than creating products only for minor sub-segments.”

“The Chinese New Year, or Spring Festival, marks the most important holiday in the Chinese calendar. It is a festival celebrated by one-fifth of the world’s population. The release of the WCLC Year of the Rooster Scratch ‘N Win ticket celebrates the ushering in of a prosperous new year,” said Don Coleman, Manager, Big Play Products, WCLC.

The Rooster ticket is a C$2 ticket offering prizes up to $20,000 and it features symbols based on the Chinese New Year theme. There is no POS support for this game.

Ontario Lottery & Gaming (OLG) also launched a Year of the Rooster ticket. The design is by SGI Canada. The ticket is supported with a poster in high multicultural market retailer stores. The headline reads “Happy Lunar New Year.”