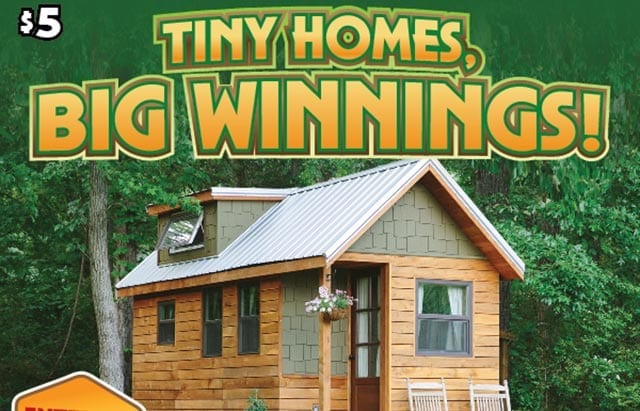 Tiny homes are all the rage on television. Shows like Tiny House Nation have a loyal following of people who dream (or just want to imagine) living in a 250-square-foot tiny home (also known as micro houses, compact houses, mini houses and little houses.)

The Maine State Lottery is capitalizing on this trend, launching an Alchemy3-licensed Tiny Homes scratcher on June 1. The ticket has a $5 price point. The overall payout is 69%.
“We’re very excited to be working with the team at Alchemy3 to offer this unique and exciting game to our players,” stated Michael Boardman, Director, Lottery Operations, Maine Lottery. “We believe this is a great opportunity to expand our player base to those who may otherwise overlook the lottery. We’re especially encouraged to hear from folks that a tiny home isn’t just for those looking for a minimalist lifestyle but are attractive to those looking for a second home or a summer cottage.”

The Maine Lottery is projecting weekly per capita sales of $0.09 ($120,000 per week). “As with many other licensed property games, we’re hoping this will garner the attention of a new consumer who otherwise wouldn’t take notice,” said Boardman.

There will be two tiny homes given away in second-chance drawings. In addition, the Maine Lottery will also offer a top cash prize of $100,000 that can be won instantly in the game.
Since curiosity is so high about living in a tiny home, the Maine Lottery feels it is critical to expose consumers to the game’s non-cash prize.[fusion_imageframe image_id=”3388″ style_type=”bottomshadow” stylecolor=”” hover_type=”none” bordersize=”” bordercolor=”” borderradius=”” align=”right” lightbox=”no” gallery_id=”” lightbox_image=”” alt=”” link=”” linktarget=”_self” hide_on_mobile=”small-visibility,medium-visibility,large-visibility” class=”” id=”” animation_type=”” animation_direction=”left” animation_speed=”0.3″ animation_offset=””]http://lafleurs.com/wp-content/uploads/2017/04/Maine-Lottery_TinyHomesBigWinnings_ARTILCE.jpg[/fusion_imageframe]

“In addition to the two custom homes being given away, we are planning to have a third one built that we can take on the road to promote the game and allow people to get a feel for what a tiny home really looks and feels like,” said Boardman.

Plans include displaying the tiny home at fairs, festivals and retail locations.

The slogan for this scratcher emphasizes the contrast in the prize versus the experience. “We’re really focusing on the game’s name “Tiny Homes, Big Winnings!” which we believe really says it all,” said Boardman. “The ticket artwork showcasing a tiny home will certainly standout amongst our other game offerings.”

The lottery chose Alchemy3’s Tiny Homes license due to its novelty. “We’ve worked with Alchemy3 in the past and they have always been great partners. When they approached us initially about the possibility of offering the game, we were intrigued by the idea of offering something unique that is extremely relevant in today’s culture,” explained Boardman.

The Tiny Homes movement in Maine is quite large. “It wasn’t until we started looking into offering the game and doing some research that we realized how popular tiny homes have become in Maine,” said Boardman.

In terms of the demographic profile for the “Tiny Homes, Big Winnings!” scratcher, the lottery originally thought the ticket would appeal to a younger demographic.
“Initially we thought that would be the case but some of the data suggest that a fairly high percentage of tiny home owners are older,” said Boardman.

“Looking at the data it appears to skew more female but not as young as we initially thought. The data that we’ve seen indicates that 40% of those who own a tiny home are over the age of 50. This was a bit surprising but not concerning, especially since Maine has one the oldest populations in the nation,” he added.

The lottery hasn’t conducted any formal research although it has talked to lottery retailers and players.

“One thing that has surprised us a little is that people have talked about a tiny home being a ‘second home’ which seems to go against the ‘minimalist lifestyle’ that seems to be associated with tiny homes,” observed Boardman.

Maine Lottery is working with Alchemy3 to maximize the publicity for this novel ticket.

“When we first started talking with Alchemy3 it was clear that we were on the same page with our marketing strategies for the game,” observed Boardman. “Their recommendations included showcasing a home at trade shows, fairs and festivals was a great way to draw attention to the game. Even if you’re not in the market for a tiny home you’re curious about them and will take the opportunity to experience one if it’s available. In addition we will use our in-store advertising monitors, printed POS, social media and radio advertising.”

This is not the first scratcher to focus on the outdoors. For example, the “Maine Crossword” game highlights the beauty of the state and features various images from across Maine. “With our beautiful coast lined with lighthouses to our picturesque mountains, lakes streams and wildlife, there are endless opportunities,” said Boardman.