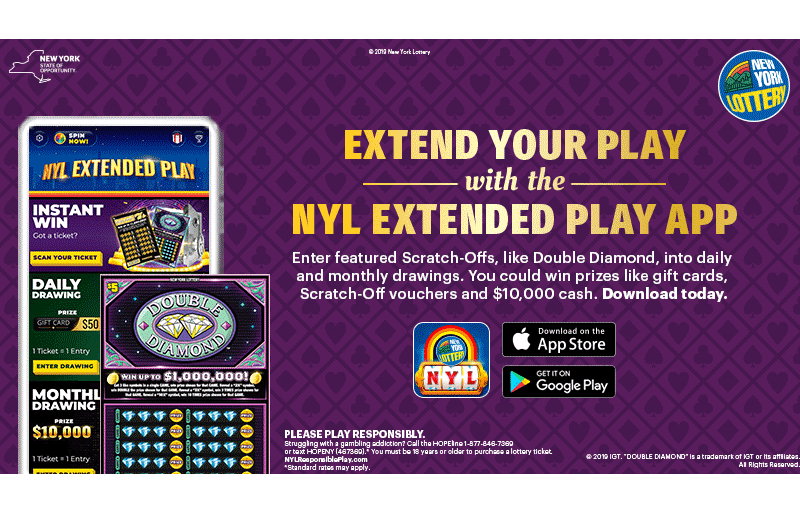 “Gold Bar 7s® is our third foray into the digital/instant game space, and we have learned a lot from it and each release thereafter,” said New York Lottery Director Gwen Dean. “Our previous two games focused on retail-to-digital. The third and fourth games, which flipped the strategy to digital-to-retail, are IGT licensed properties with the digital platform powered by PayMaxs. With each iteration, the digital features are more exciting and innovative. The PayMaxs platform is flexible and the developers are incredibly creative and responsive, which is needed to support our Launch-Measure-Pivot approach to keeping things interesting and fresh.”

According to Dean, “the lottery had two goals with this initiative: 1) offer core players an instant ticket with strong appeal to produce revenue; 2) expose digital game players to the New York Lottery via unique, amplified player engagement and use instant ticket coupons to drive them to retail.”

The Extended Play platform has shown an extremely high rate of players returning with another purchased ticket. “In fact, nearly 600,000 tickets were scanned in the first six weeks of sales, which represents about 25% of ticket sales during that time. Additionally, the 88% coupon redemption rate far exceeded our expectations. Six weeks following the April 30 launch, retailers redeemed nearly 100,000 instant ticket coupons,” she continued.

With the digital-to-retail strategy, players were not required to purchase an instant ticket to engage with the Extended Play Games app. “Instead, digital players could engage with the digitally for chances to win instant ticket coupons ranging in value from $1 to $10. Players were, however, required to purchase tickets to be entered into daily drawings and monthly drawings for $50 and $10,000, respectively. In this way, we were able to sustain circular engagement as users re-engaged for the chance to win these desirable prizes,” Dean said.

In the first six weeks, there were approximately 70,000 downloads of the Extended Play Games app thanks in large part to users taking advantage of the multiple engagement points available to them. “The strongest engagement proved to be the slot machine, which generated more than 33 million spins in those first 42 days,” said Dean.

In terms of repeat engagements, Dean said there were “on average, 13 ticket scans per player, with a retention rate of nearly 50% after the first six weeks. The introduction of a second game produced a lift in daily engagement and ticket scans. Players came back to enter the daily and monthly drawings and advance to the next achievement level to receive the $1, $2, $3, $5 and $10 instant ticket coupons.”

Key features in the mobile app include daily drawings for a chance to win a $50 Amazon gift card and monthly $10,000 cash drawings. “The New York Lottery Extended Play app facilitates and animates drawings and will continue to provide a captivating experience to further engage with the Lottery brand,” said Dean. “We launched A Summer Cash Bash promotion with eight weekly drawings for a progressive jackpot on July 1. And bringing even more excitement to the promotion, we have integrated a live show into the app featuring the New York Lottery’s extremely popular Yolanda Vega hosting the final progressive prize drawing. The goal is to keep the mobile app fresh and exciting, so users have a reason to buy tickets and engage with the app,” said Dean.

New York’s advertising strategy aligned with its goals. The instant ticket was promoted at retail with messaging that featured the top prize and game features. “On digital platforms, the New York Lottery promoted its Extended Play mobile app. We made certain outreach and messaging aligned with each intended audience. The strategy included very specific goals, all of which we accomplished in the first six weeks of launch,” said Dean.