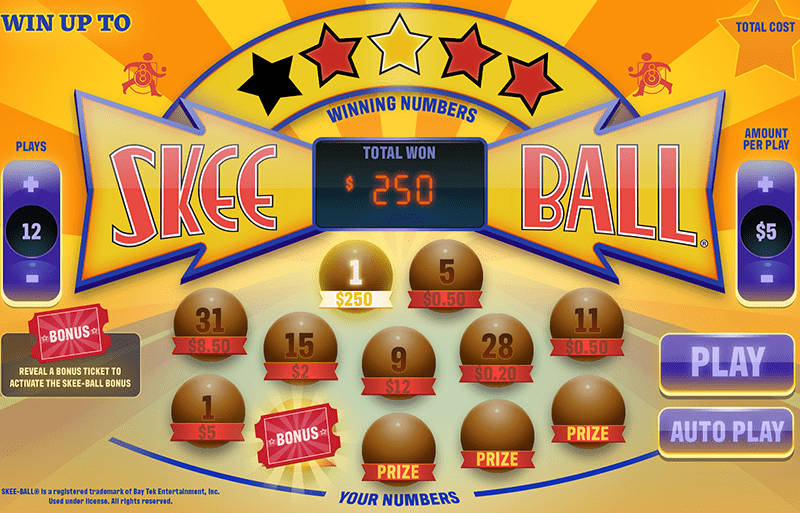 “With the popularity of the brand and various SKEE-BALL leagues around the Commonwealth, we felt the opportunities were endless,” explained Stephanie Weyant, Deputy Executive Director, Marketing & Products, Pennsylvania Lottery. “Not only does it allow us to sell a licensed property that resonates with a wide range of players, but it also gives us the opportunity to create a new game mechanic for our iLottery platform while also featuring variations in the Scratch-Off, Fast Play, and Keno game categories.”

The lottery planned a staggered launch schedule across four different product lines. The $2 Fast Play game launched first on May 5. The Keno screen with an animated rolling ball to select the winning numbers went live starting May 12 in all monitor retail locations. The $2 Scratch-Off game launched on May 18. The last SKEE-BALL® game to launch will be the iLottery game on June 4, designed by IWG. That game, like the Keno screen, will also feature an animated rolling ball down the SKEE-BALL lane during the bonus game.

“While we are launching games in four different categories, each game has one similar design element to bring them all together—the iconic scoreboard that SKEE-BALL fans have come to recognize and love,” said Weyant. “In addition to these games, players can also play a just-for-fun game on our SKEE-BALL Second-Chance Drawing site to compete for the top spot on the leaderboard. Entry into the drawing is not required to play the just-for-fun game.”

Using licensed brands for its omni-channel strategy is key. “The next fiscal year will be focused heavily on bringing players full circle with our products, from retail to online and vice versa. This is a good opportunity for us, using a licensed property, which we believe many players will enjoy,” she said.

Weyant said the initial plan was only to do a SKEE-BALL Scratch-Off game but the lottery decided to dive head-first into a full-on coordinated campaign. “SKEE-BALL is a timeless and nostalgic game that resonates with players. We anticipate our players will appreciate seeing the brand in several different game categories,” said Weyant.

It also helped that the lottery could deploy the SKEE-BALL license over instant, draw and digital products. “A goal for our products this upcoming fiscal year is to create as many opportunities for cross-promotion as possible. Not only does it help to strengthen our brand, but it also opens up players to new product categories they may not have considered previously,” said Weyant. “By offering multiple games and multiple promotions with one theme, we are adding value to our product and that is ultimately what our players tell us they want. In addition, it makes for a coordinated and all-inclusive advertising campaign through both traditional advertising and through digital efforts.”

Weyant said retail “events and our retail couponing program are currently on hold due to COVID-19. Looking ahead, we do have retailer events with SKEE-BALL branded merchandise tentatively planned for July or August, but that timeframe may change.”

In the lottery’s planned, tentatively scheduled promotion, players can spin the wheel when they make one of three SKEE-BALL purchases: two Fast Play, two Scratch-Off or two Fast Play and one Scratch-off tickets.

“The limit is two spins per person. A player can win SKEE-BALL-branded merchandise including: T-shirts, lunch cooler bags, brunch tote, twist bottle with a straw, LED key light with a bottle opener, or a $2 Fast Play coupon or $2 Scratch-Off coupon,” said Weyant.

SKEE-BALL® will be supported with a comprehensive advertising campaign including television, online video, online banners, digital out-of-home, and paid social media. “We are grateful to the Maryland Lottery for allowing us to re-use and edit their SKEE-BALL television spot,” said Weyant.