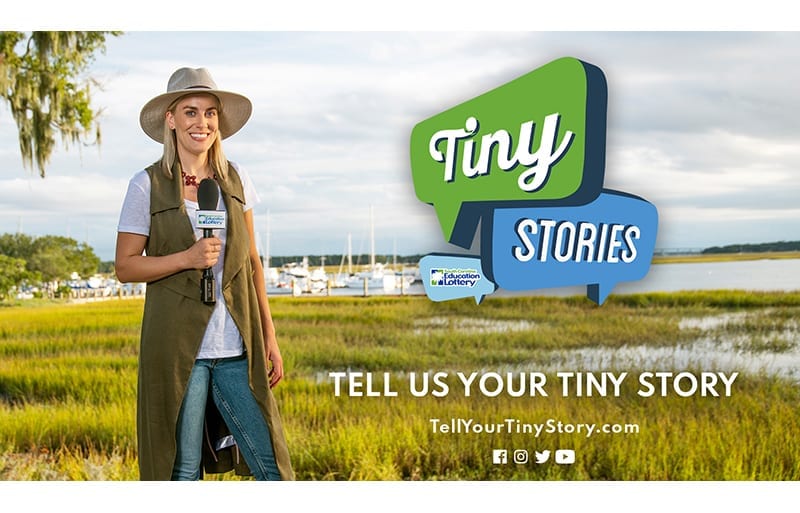 Tina Tiny is on a quest to uncover “tiny” lottery winners. “Thousands of people win the Lottery every year in South Carolina, but unless they win millions, it’s like they don’t exist — until now . . . In MY world, tiny is BIG, so stay tuned for Tiny Stories across South Carolina with me, Tina Tiny,” she explains. “Don’t forget to share your story!” 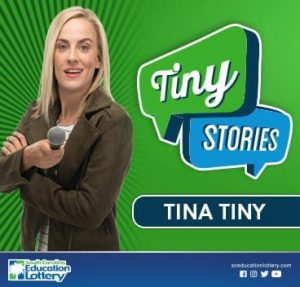 While Tina is an actress appearing on four 30-second “Tiny” winner spots created by South Carolina Education Lottery (SCEL) in 2019, she looms LARGE.

With her microphone in hand, Tina Tiny interviews outlandish lottery players who buy a tiny elephant (Cat Mandu) or go off the grid to avoid buying lunch for friends (and spending his $500 prize). Or click these links to watch the Junebug & Spritz TV ad, the Bart TV ad and the Chaz Dingus TV ad.

“We wanted to find a unique way to bring awareness to the fact that there are thousands of lottery winners in our state each day. Most of these wins are not top prizes or jackpots which makes them more relatable to our consumer,” said Whiteside. “We do believe that this campaign helps serve as a reminder that you can win the lottery even if it’s not the jackpot.”

Originally, SCEL planned to cast a very large wrestler guy named “Tiny” for its lead role. “As we were going through casting, Hannah, our ‘Tina,’ auditioned for another role. We immediately knew we had something special with her. We had her read for a few other parts and then decided to have her read for ‘Tiny.’ When she read for ‘Tiny’ we promptly shifted who our lead was going to be and thus, ‘Tina Tiny’ was created,” said Whiteside.

Whiteside remembers the ‘Tiny Story’ shoot as by far one of the funniest weeks he ever had in his life. “I cannot remember ever laughing that hard for so long, day after day. There are so many funny stories and moments throughout that week of production, that it would take me a week to tell them all,” said White.

SCEL’s first Tiny Stories ad ran during the 2020 Super Bowl. “We strategically ran the first ‘Meet Tina Tiny’ spot throughout our state at the halftime break of the Super Bowl,” said Whiteside. “We felt that using the Super Bowl as a vehicle to launch Tiny Stories was a no brainer. We would have so many eyes on the ‘Meet Tina’ spot that it would make it easier for people to understand and grab hold of the idea. The next morning, we had received hundreds of emails with people telling us their Tiny Stories.”

SCEL pulled the Tiny Stories ads during the pandemic. “When the pandemic started and South Carolina went into a Stay-at-Home order, we decided that it would be in good taste to pause our product advertising and focus on Beneficiary and Responsible Play campaigns. We had been very prepared for the shift by just completing a three commercial Beneficiary campaign shoot,” said Whiteside.

The Tiny Stories ad campaign began re-running in fiscal 2021. “Once South Carolina had lifted the stay at home order and after extensive discussion with my team and our executive staff, we decided to reinstate the Tiny Stories campaign. Seeing as how the campaign did not get its fair shake in market, we looked at this reboot like a reintroduction to Tiny,” he explained.

SCEL is currently in production of its second wave of ‘Tiny Stories’ ad. Whiteside hopes to be wrapped up by the end of the year. “We are looking at a first quarter launch of ‘Tiny Stories 2,’” he added.

Whiteside believes the campaign is succeeding well, given the feedback. “We have received so many positive remarks from players and infrequent players around the state. We hear all the time via email or in person that Tina is a likable character and the fact that we are calling attention to smaller wins is a reason for infrequent players to try our product again,” said Whiteside.

The Tiny Stories in the initial campaign were not real stories “but the stories seen on our social channels are real submissions from real South Carolinians,” said Whiteside.

Players have eagerly responded to SCEL’s call to “Tell Your Tiny Story” on its website. “We have received thousands of emails from this campaign from people telling us their Tiny Stories. Being able to share those real lottery winning stories on our social channels has helped legitimize the campaign. Once we started sharing real stories on our social channels, a snowball effect started happening as people felt compelled to share their own story with us in the hopes of being featured,” he said.

In the future, an ad might feature a real lottery winner. “In the current TV and radio spots, we’re using actors with Tina. We use real stories as paid social posts, which we’ve seen great engagement numbers on. Because of that success on social, we’re currently working on ways to feature real lottery winners with Tina in mass media placements.”