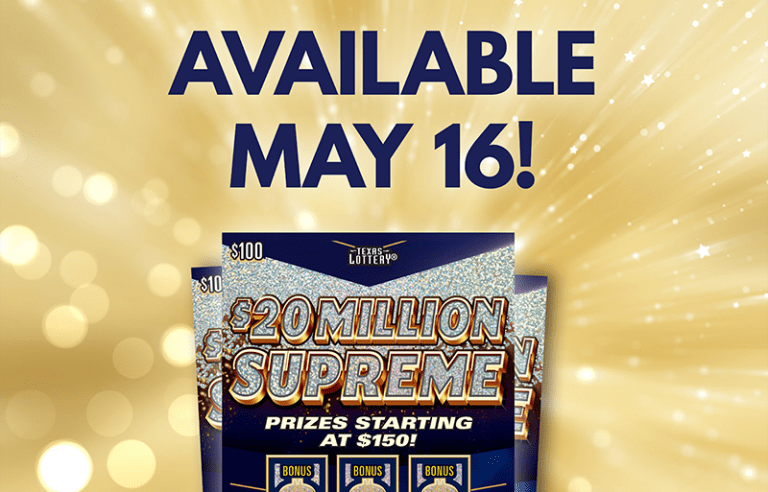 In 2007, only five lotteries sold scratch tickets for more than $20. At the time, the $20+ price point category generated about $4 billion in revenue, which amounted to ~13% of total instant sales; on the other hand, the $1 price point amounted to 12%. It was also the year the Texas Lottery launched the industry’s first $50 ticket.

Due to inflation, lotteries today would have to release $70 tickets to cost as much as the Texas Lottery’s $50 ticket in 2007. (La Fleur’s Magazine)

Another seven years would pass before the next Lottery would release a $50 ticket, and another 14 before it would become a widely adopted price point by most U.S. lotteries. The acceptance of higher price point tickets by Lotteries and their players has drastically transformed the portfolio and the distribution of price point revenue generation. The $20+ category is worth 40% of instant sales, while the $1 category has dwindled to 3%. This drastic change has led the Texas Lottery to take the next step by introducing $20 Million Supreme, the U.S. Lotteries’ first $100 ticket, in May 2022. A $100 ticket has been on the Texas Lottery’s radar since 2007. “When we created the $50, we focus researched both the $50 and the $100 price points. Even back then, the $100 was perceived well by the participants in that focus group,” said Dale Bowersock, Scratch Ticket Coordinator, Texas Lottery.

The Lottery opted not to move forward with the triple-digit price point until the market’s needs met the perfect prize structure.

The Texas Lottery’s consideration of the $100 ticket’s timing was predicated on the growth of the higher price point tickets. The Lottery attributed this initial growth to the effects of the pandemic. New players had many entertainment options removed, and the $10+ tickets became a desirable substitute.

“In FY21, our $50 price point was 75% higher than in FY20. Our $20 was 33% higher. And our $10 was 17% higher. The growth we’ve seen at the higher price points has been stunning,” said Robert Tirloni, soon-to-be Lottery Operations Director, Texas Lottery. “Obviously, there is a strong demand for these higher price points.”

In FY22, after the market had returned to a state of normalcy, the Texas Lottery’s $20+ price points were still up year-over-year. Why? Because those players had discovered a lottery product that they enjoyed.

“Why did the $50 do so well? When you look at the closed entertainment options like casinos and movie theaters, there was a lot less competition in the marketplace. Also, there is a type of player that we’ve been trying to appeal to that appreciates risk,” said Ryan Mindell, Lottery Operations Director (soon to be Deputy Executive Director), Texas Lottery. “The $50 excites those players in a way that lower price points simply don’t.”

(In other articles in this issue, this new group of players is shown to be profoundly impacting the industry this year, such as preference for licensed property tickets.)

“These players don’t fit the profile of ‘casual lottery players’ because they don’t buy a scratch ticket now and again when they happen to think about it,” Mindell said. “Instead, they’re seeking a certain play experience that has more excitement and risk, and they will engage with the lottery if we provide it.”

It was critical for the Texas Lottery to keep those players interested, so it began considering all its options.

In 2019, Nicole Jordan, previous Director of Marketing, DC Lottery, presented on $10 Million Cash Extravaganza, their first $30 game. The game had a unique prize structure, which caught the attention of Mindell. Despite a limited print run, the game had three top prizes of $1 million. It accomplished this by drastically reducing the number of mid-tier prizes.

The “Hourglass Prize Structure,” as it would be later dubbed internally by the Texas Lottery team, was a prize structure that emphasized a high-top prize and a lot of low-tier prizes while almost ignoring everything in between. “That idea really came straight from a La Fleur’s conference. The DC Lottery talked about how they were able to get a $1 million prize into a print run of $300,000,” Mindell said. “I went to Robert and Dale, and I said, ‘Texas-size this.’”

The potential for it was clear, but the Texas Lottery had not settled on the perfect ticket to use it on. At the time, the most likely choice was an extended run $30 ticket.

Texas Lottery Executive Director Gary Grief knew the time was right to start looking at a $100 ticket. “When Gary decided to launch the $100 ticket, he asked if we had any exciting concepts we could use,” Mindell said. “We are working on the $100 ticket, and we have this prize structure sitting there as a standalone concept. We thought, ‘Well, let’s put the peanut butter and chocolate together!’”

Loto-Québec launched the first ‘$100’ ticket in 2017. WCLC also launched a $100 ticket earlier this year. However, when factoring in exchange rates and inflation, $20 Million Supreme is the highest-priced scratch ticket in the industry’s history. (La Fleur’s Magazine)

Bowersock began working with IGT on the Hourglass structure for the $100 ticket. They reviewed a wide range of models, but all the models had two essential elements: a $150 minimum prize and a $20 million cash prize.

“A breakeven win doesn’t feel like a win for many players,” Bowersock said. “In our focus group research sessions, players will often say I didn’t win; I just got my wager back. We wanted to ensure every win felt like a true win because you’re leaving with more than what you wagered.”

The top prize also had to feel huge, on par with the starting jackpots of Mega Millions and Powerball. The team decided the jackpot would be a cash prize instead of an annuity.

“It’s overwhelmingly consistent; people want the cash up front. We see this regularly on all of our jackpot games. They don’t want to be paid over 30 years. So, we adopted that on the scratch side,” Tirloni said.

The team finally settled on the option that kept the odds low; 1 of every 3.49 tickets would win. A small percentage of the prize pool would go to mid-tier prizes, but the lion’s share, about 70%, is allocated to prizes under $500, and the rest would go to the jackpot.

“There are other prizes between those levels, but the bulk is high and low. Twenty-five percent of the prizes are worth $500,” Bowersock said. “It is a really strong structure for the players who want to win a meaningful prize.”

“We wanted to throw everything and the kitchen sink in that ticket design,” Bowersock laughed.

As shown, the ticket uses a rich blue and silver. It showcases Pollard Banknote’s Scratch FX® and Soft Touch™, which use specialty inks to give a distinct tactile feature to the surface of the ticket.

“I think that everything about that ticket, from the color to print features, screams premium product,” Bowersock said.

The Texas Lottery opted for a limited play-action area with three bonus spots.

“You can build lots of multiple games into a ticket, or you can make it as simple as yes or no. We kept it simple with a key number match and a couple of large bonus boxes because we find higher price point players don’t want a lot of extended play,” Bowersock explained.

“Did you promote the ticket at all?”

“We produced one social media post,” said Lauren Callahan, Media Relations Director, Texas Lottery.
Unfortunately, this is becoming too common as state governments continuously reduce lottery marketing budgets. It has pushed lotteries to be more creative on how to best notify their players of new games. 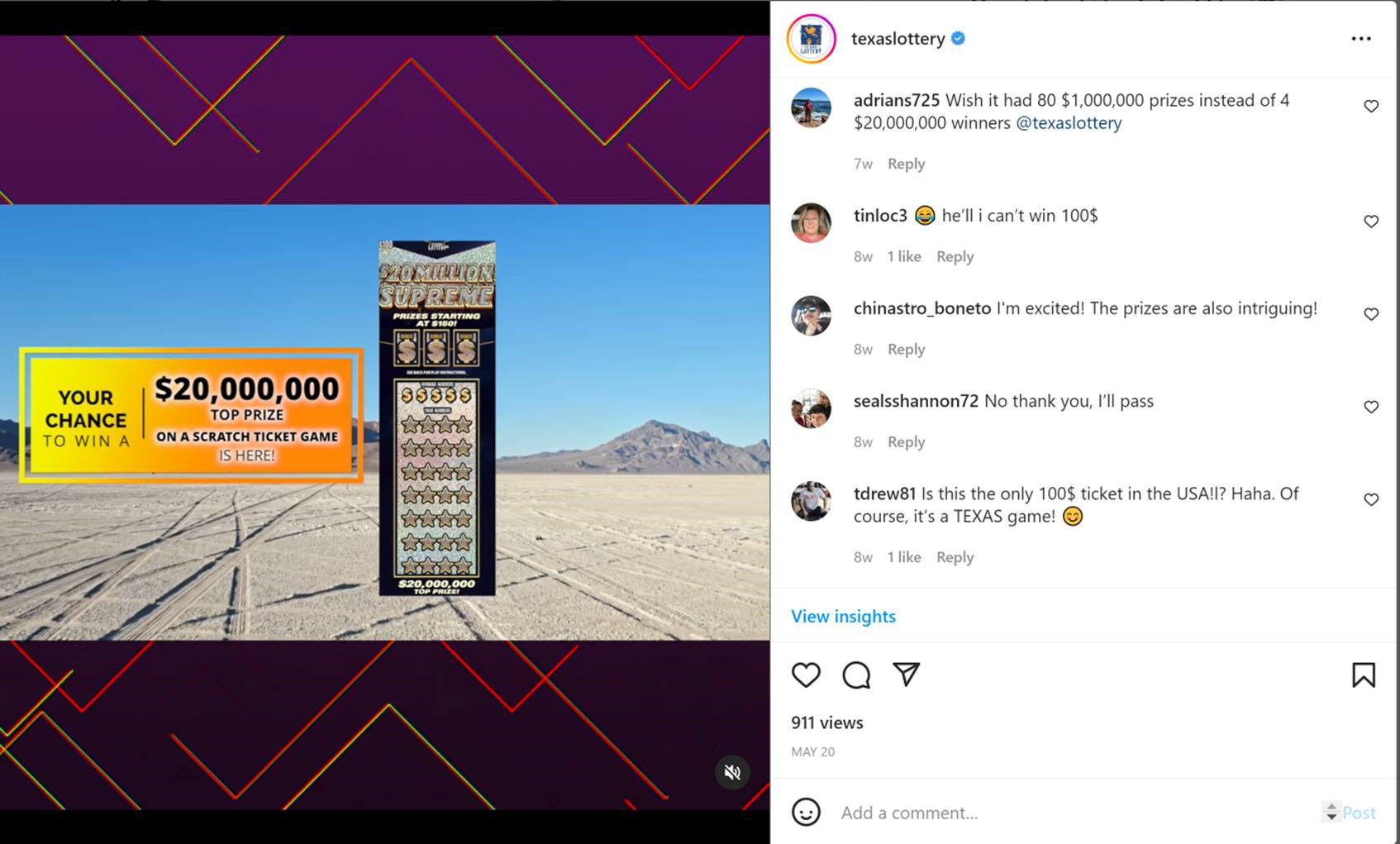 One corporate chain did help with some in-store advertising for the $100 ticket. “We obviously were happy that they wanted to do that, and we worked with them to execute that,” Tirloni said.

While the controllable promotional attention was light, the Texas Lottery assumed the news would pick up on the game’s release. When the original $50 ticket was released, the New York Times dedicated a 1,600-word article about its concerns with the product. The Texas Lottery knew to be ready for everything and anything from journalists to bloggers.

“We take every reporter’s inquiry seriously. We started preparing our response last summer because we started getting some inquiries from players,” Callahan said.

The word started getting out in July of 2021, and most people were excited about it. “We knew why we were doing this, and we knew it was important,” Callahan said. “We knew that when we did get questions, we needed to be able to articulate why this was important to Texas at this time.”

No outlet with similar clout has released anything about the $100 ticket, but the Texas Lottery did face a few regional thought pieces. Most of it was purely informational, but some editorials and blogs castigated the Lottery.

“Every week of the hundred has been better than any other week of any ticket in the last 25 years,” said Ryan Mindell. 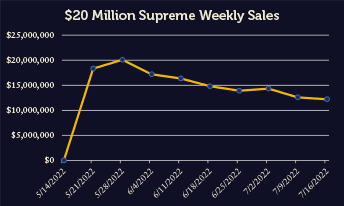 The Texas Lottery printed about 10 million tickets. The team wanted to be open-minded about how the market would receive it and so had few expectations. It could have been in the market for as long as four years.
It will be in the market considerably less than that.

Over the first six weeks, sales reached $106 million, exceeding all the lottery’s expectations.

“It has been our number one ticket,” Mindell said. “Every sales week of $100 has been better than any other ticket in the last 25 years.”

The early results suggest the game will sell out within 12-18 months, which puts pressure to create the next game. Mindell and his team have some general concepts ready for a second ticket, but they do not have plans to print another ticket soon. Bowersock is already back to the drawing board, trying to figure out what worked and what didn’t for the first ticket.

“We’re going to start gathering information from players and our retailers to see what kind of feedback they get on the different types of prize levels,” Bowersock said.

One of the biggest questions Bowersock wants players to answer is whether the $20 million-dollar top prize is necessary or if it can be lower.

The Texas Lottery timed the $100 ticket’s introduction to satisfy the new experiential-hungry players and the rising acceptance of higher price points. It created a prize structure that would appeal to jackpot chasers and filled with chatter prizes. With the game’s incredible success, it will be interesting to see whether another U.S. Lottery will launch a $100 ticket before the Texas Lottery releases its second or third iteration of the ticket. After all, it was seven years before anyone dared to print a $50 ticket. It is hard to imagine the rest of the U.S. industry will wait very long before following in Texas’s bootprints.

Best Instant Games of the Year