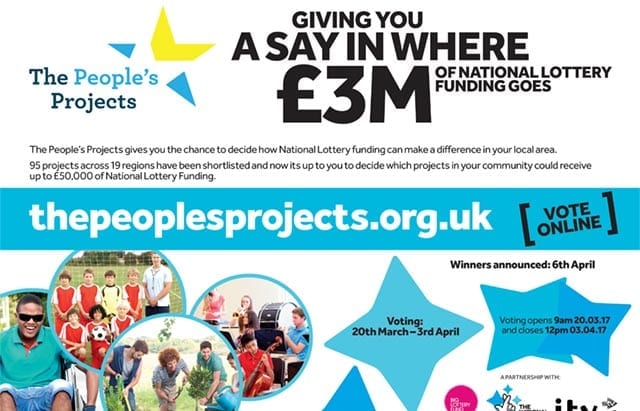 Since January, Camelot’s retail sales teams have been spending time briefing over 16,000 retailers about The People’s Projects as part of their store visits, encouraging retailers to get involved at a community level with their customers and to give players a chance to have a say in where some of the National Lottery funding will go as part of the initiative.

POS kits in two phases are being distributed to every single National Lottery outlet across the country. Phase one, in place already, includes a poster, Playstation Tax Disc and Playstation Feature Game Area insert.

Phase two began in mid-March, when voting on The People’s Projects goes live, and all stores received an additional Playstation wing and window poster. Select stores also received up-weighted POS items such as a banner, window vinyl and bunting and Camelot staff were out in retail speaking to retailers and players alike and distributing additional POS and promotional items.

Since 2005, around £36 million has been awarded through The People’s Projects (and its predecessor The People’s Millions) to 770 Good Causes across the UK. This year £3 million of National Lottery funding is up for grabs, which will be distributed across 19 regions in the UK, with three prizes of up to £50,000 being awarded per region and a further two discretionary prizes of up to £5,000 available, making a difference to local communities across the country.

“The People’s Projects really gets people involved in how National Lottery funds are distributed in their local area,” said James Pearson, Head of Retail for Camelot. “It’s a great opportunity for retailers to engage with their customers and actively involve them in the voting— reinforcing that important link between the money people spend in stores each week on their National Lottery tickets, and the massive difference that National Lottery funding makes to communities up and down the country.”

Members of Camelot’s retail sales team also visited UK lottery agents after voting opened on March 20th, to speak to retailers and National Lottery players about The People’s Projects and to encourage as many people as possible in each local area to get online and vote for their favorite project. Retailers and players can look up their postal code to search for local projects.