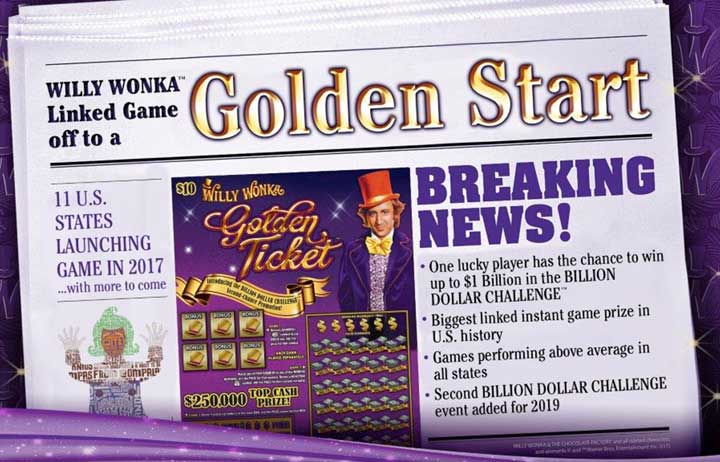 Scientific Games executives knew the company had to find the next big concept after Powerball® rolled up to a $1.6 billion jackpot in January 2016. So Jim Kennedy, EVP, Group Chief Executive, Lottery, sat down with his business leaders to discuss what could help lotteries fix the inevitable sales decline in fiscal 2017.
“Last year when we were coming down the home stretch of this epic Powerball jackpot, I remember I was on a call with the team and I said, ‘let’s celebrate this because tomorrow, we’re going to live in a very different world. In their next fiscal year, our customers are going to be looking for some tentpole to create excitement,’” recalled Kennedy.

It was an innovation challenge that would morph into the WILLY WONKA GOLDEN TICKET™ instant linked game, which features a bonus second-chance opportunity to win trips to Las Vegas where lucky players will take part in the WILLY WONKA BILLION DOLLAR CHALLENGE™ event to win cash prizes from $1,000 up to $1 billion.

Scientific Games already has strong ties to the licensor Warner Bros. Consumer Products, as WILLY WONKA & THE CHOCOLATE FACTORY™ is one of its top three licensed casino brands.

WILLY WONKA & THE CHOCOLATE FACTORY offers a natural connection to lotteries. “It is one of the best performing brands in the casino space, and the iconic Golden Ticket is the perfect theme for a lottery game. People are excited to buy this game. They know if they get the Golden Ticket, something very special is going to happen,” said Chuck Kline, Senior VP, MDI at Scientific Games.

There are 11 lotteries set to offer the game in 2017-2018, with more in discussions. Three months after the launch of the WILLY WONKA GOLDEN TICKET game, it continues to out-perform all other instant games at its price point. The publicity surrounding the game and the BILLION DOLLAR CHALLENGE™ is translating into brisk sales. “I think that’s a big reason why it’s performing so well,” shared Kline.

The magic of game design is always the one-two punch that produces long-term strong sales. “It’s the attraction of the image and the proposition—but the sustaining value is in the game design,” explained Kennedy. “What’s so exciting for me is the engineering that goes into the product—you know, under the cover of the game design, the prize structures, the way the game is laid out, the play style. What we see in a lot of cases is people who rely far too much on just the picture on a ticket and the sales are not sustained. What we’re seeing in this game is its unbelievable legs. Not only is it coming out swinging, it has really strong sustainability.”

The Texas Lottery was the first to launch the WILLY WONKA GOLDEN TICKET game at the $10 price point. “Texas was first to go [on sale], which was great because getting a linked game of this magnitude off the ground is always daunting, and they did a super job. Texas has carved out a niche category of 8-inch by 12-inch tickets, and they entered with this larger sized ticket. It’s one of the best-performing games of the year,” reported Kline. “As of July 1, they have already sold three-quarters of their tickets. Texas is very pleased with the performance of the game, as well as all the positive publicity and excitement that it generated for them.”
In addition to Texas, lotteries in Arizona, Arkansas, Colorado, Georgia, Kentucky, Maine, Michigan, New Mexico and New York are selling the game. Others are poised to launch in the coming months. “The game is doing really well in all of these states. A huge factor is the excitement that it generates in retail. It gives retailers and their employees something to rally around. It makes the lottery more relevant,” said Kline.

WILLY WONKA is on track to rank as one of Scientific Games’ top grossing licensed games in fiscal 2017.

WILLY WONKA GOLDEN TICKET is the latest entry in Scientific Games’ linked games category, which the company pioneered in 2007 with its Deal or No Deal™ game. It is not just a licensed game. “Linked games are a category that Scientific Games has uniquely driven for years with our various game show experiences,” shared Kennedy. “I believe that WILLY WONKA GOLDEN TICKET could be our best performing linked game yet.”

“And what’s really exciting is that because it’s performing so well, lotteries that might have been on the fence now are starting to show renewed interest,” added Kline. “The way we structured this is players’ eligible non-winning tickets can be entered into an online second-chance drawing for the opportunity to participate in the BILLION DOLLAR CHALLENGE for the chance to win up to a $1 billion annuity. The BILLION DOLLAR CHALLENGE event is planned for May of 2018 in Las Vegas. We will produce two BILLION DOLLAR CHALLENGE events in Las Vegas. The first will occur in April 2018. And there will be a second event in 2019, so lotteries still have an opportunity to get into the game.”

Scientific Games was a first mover in what Kennedy describes as vendor aggregation through linked games. “Clearly the lotto bloc games were doing this, but Scientific Games developed the enterprise over the years to give each individual jurisdiction high autonomy in how they design, construct, execute and launch linked games,” he explained. “Linking and leveraging these exciting tentpole events is really quite an art. We have led the industry in this category for a very long time, and I think this is a great example of our innovation. Our expertise in this area is really singular. It’s golden.”