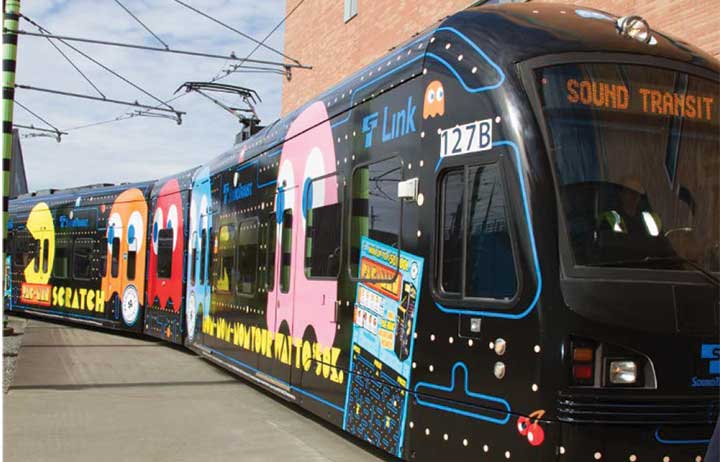 Washington’s Lottery has enjoyed outstanding success for its $5 PAC-MAN® instant ticket licensed from Pollard Banknote. Launched on April 19, 2017, the game’s 10-week average sales were 55% higher than the average 10-week sales of all other $5 games launched by the lottery since 2014, confirming the enduring appeal of the PAC-MAN® brand.

The PAC-MAN arcade game was an instant hit with players when it launched in North America in 1980, and the brightly-colored mascot quickly became one of the most iconic video game characters of all time. Combining the nostalgic flair of the video game with the proven high appeal of PAC-MAN® ticket designs, it is easy to see why sales are yielding amazing results.

To increase awareness and engagement, Washington’s Lottery wrapped the exterior of a Washington State Transit Association train with PAC-MAN® instant ticket advertising, asking players to “nom-nom-nom your way to $50K.”

For maximum excitement, in addition to the chance of winning up to $50,000, the lottery gave players the opportunity to instantly win one of four retro PAC-MAN® game consoles.

“In the first few weeks after launch, it became apparent the game would be a huge success,” said Ron Smerer, Sales & Marketing Director, Washington’s Lottery. “We work diligently to bring our players the best instant games that the industry has to offer and we look forward to continuing to work with Pollard Banknote to explore new, innovative, and fun instant game ideas and initiatives in the years to come.”

“The sales performance of the Lottery’s PAC-MAN® game adds to the many North American success stories to date,” said Sina Aiello, Vice President, Marketing at Pollard Banknote. “The powerful, well-recognized PAC-MAN® brand, with its familiar ‘arcade’ theme and strong social presence, allows us to implement robust marketing campaigns that engage players and drive sales at retail.”