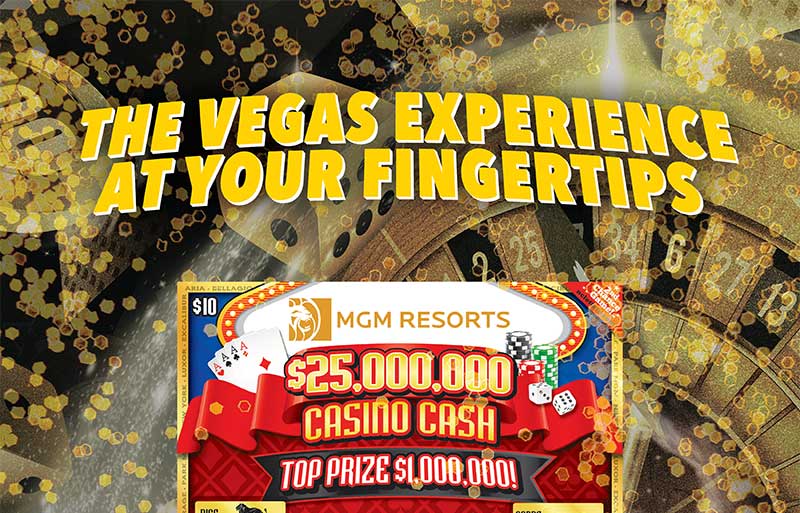 “In addition to over $25 million in cash prizes, players can enter tickets into a second chance drawing for a chance to win one of 10 four-day and three-night trips to Las Vegas at one of the MGM properties. We wanted winners to have the flexibility to build their own Vegas experience with the trips and that is why we partnered with A3 and MGM,” he added.

NCEL is using a Super Ticket format. “We felt that the large format was a great way to both showcase a strong brand like MGM and to include a lot of casino-themed play value to our players,” said Spielman.

There are 45 chances to win. NCEL will be awarding 10 “Vegas Your Way” trips through three second chance drawings.“Alchemy helped us put together trip packages and helped craft the positioning of the Vegas Your Way concept,” said Spielman.

The consumer message emphasizes the flexiblity:

“The North Carolina’s Vegas Your Way 2nd Chance Promotion is a chance to win a three-night, custom Vegas adventure built for the way you want to do Las Vegas – your way! Use a $4,500 travel and lodging budget and select any one of the ten Las Vegas MGM Resorts properties of your choice, from the splendor of the Bellagio to the excitement of New York, New York. You’ll also receive $1,500 additional credit, redeemable at any of the ten Las Vegas MGM Resorts for food, beverages, shopping, spa packages, and even shows —whatever you decide! Plus, every winner also receives round trip airfare, ground transportation and a minimum of $2,000 in spending money.”

The tag line is “Don’t just do Vegas—do it your way with the North Carolina’s Vegas Your Way 2nd Chance Promotion.”

NCEL’s Vegas Your Way 2nd Chance Promotion is designed to give players the flexibility and freedom to design their own Vegas adventure.
Considering the diversity of players that enter lottery Vegas promotions, NCEL is focusing on a “customized by you” value proposition rather than scheduling specific events or activities that could narrow segment/demographic appeal.

“Winners of the second chance drawing basically have a budget to build their own Vegas experience, with one of the MGM properties of their choice being the starting point for building that experience,” said Spielman. “Outside of the budget, winners are only limited by their imagination. We really wanted this experience to be as flexible as possible to ensure that every winner gets the most of their trip prize.”

According to Spielman, NCEL has “experienced mixed results with casino themed scratch-offs in the past here. The ones that we have had success with are games that feature an iconic Vegas brand like this one.”

Schweig anticipates that the new MGM Resorts brand offering will be popular with lotteries.

“Casino-themed games typically perform well for lotteries as is the case with Caesars, The Golden Nugget, etc. We believe that MGM will be well received by consumers as we have the ability to offer all 10 of the MGM properties for consumers to choose from. Moreover, as part of this program we have access to all MGM Resorts amenities including restaurants, clubs and some of the best entertainment options in the world,” he explained.

NCEL ordered 3.5 million ticket. Weekly instant sales are estimated at $1.8 million. “We have experienced drastically difference results so far with our oversized games, but we feel this one will be on the stronger side of that performance curve due to the MGM brand and the second chance drawing,” said Spielman.

As to how the ticket will index, Spielman said “we will be happy with anything over 90 due to the fact that not all retail locations carry the large format ticket.”

The MGM Resorts brand can also be used for a draw game promotion or an interactive promotion. “We are also able to do regional programs for those states that have MGM Resorts/Casinos in their backyard,” added Schweig.