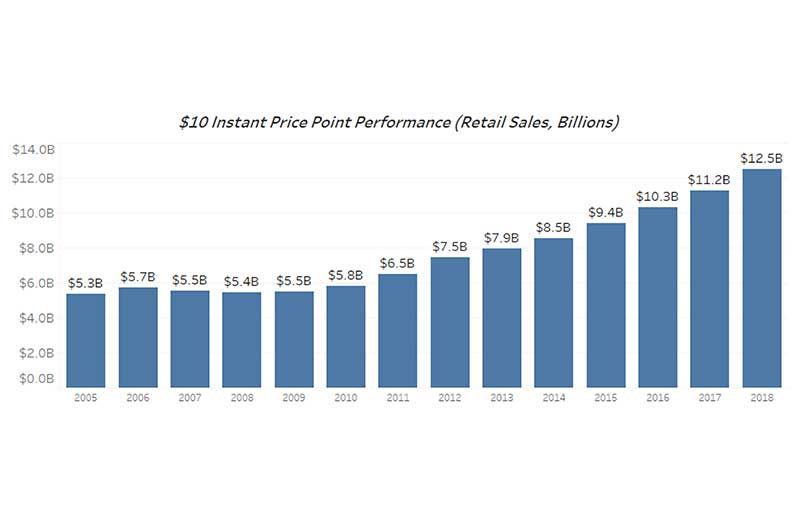 The $10 instant game price point has experienced a meteoric rise in the last decade, with retail sales more than doubling (130% growth) from 2008 to 2018. While percentages often tell a great story, even more powerful in this case are the sheer dollar figures. The $10 instant game category grew from $5.4 billion in 2008 to $12.5 billion in 2018. This is a $7 BILLION dollar lift—far more considering cumulative growth over time.

Post-Recession America just can’t seem to get enough of $10 games. After a period of stagnation from 2005 to 2010, the category particularly surged from 2011 and beyond.

The most recent calendar year brought even more recognition to the $10 category. Ten-dollar games usurped the $5 category as market share leader, and they are showing no signs of relinquishing the new title. Scientific Games’ analytics indicate that the $5 price point is flat, while the $10 category steamrolls ahead with nearly 10% growth in the last 52 weeks. Double-digit growth of sales to $12.5 billion is not inconsequential. The category’s sales have grown approximately a billion dollars a year in each of the last five years. While correlation does not equal causation, several factors may run hand-in-hand with the price point’s success. The first and seemingly most obvious question: are lotteries launching and supporting more $10 games?

Scientific Games closely tracks Games in Market (GIM), which counts the total number of unique games that yielded sales in a given time period. GIM ramped up every single year from 2005 onwards, aggressively escalating beginning in 2013. Assessing 2008, 2013 and 2018, there are approximately 350, 471 and 700 $10 GIM, respectively. With both the number of games AND retail sales doubling from 2008 to 2018, it sends a strong signal that the market responded positively. However, it is important to point out that increasing GIM is not a silver bullet for increasing sales. While in this case it appears to be causal to success, there are other factors to consider.

Consider adoption: how many lotteries are selling these products? As of 2008, 39 U.S. lotteries sold $10 instant games, which increased to 44 by 2018. A major contributor to these numbers was a large West Coast jurisdiction that went from zero in $10 sales in 2008, to more than $1.3 billion in 2018 after receiving legislative payout relief.

Another influential market trend is adoption of $10 extended play games. In 2008, fewer than 10 U.S. lotteries offered these products. By 2018, this number swelled to more than 20, propelling the category’s sales from less than $100 million in 2008 to over $1.8 billion in 2018. Virtually all of this growth stems from crossword products, the leading instant games extended play category. There were only five crossword-style games in 2008, yet over 60 in 2018. Again, this highlights the importance of focus and evolving and enhancing product availability.

One final aspect to consider is that winter is coming—to $10 holiday-themed games, that is. While the holiday product sales window is short, they still represent hundreds of millions in growth. From 2008 to 2016, sales of $10 holiday instants climbed from $380 million to more than $635 million. Most instant product managers realize that winter holiday themes are not limited to lower price point products and work to capitalize on this substantial opportunity to create credible and compelling $10 products for the holiday season.

Shifting from a product view to a macroeconomic view, inflation is a common consideration. We all know that year-on-year inflation affects many areas of our lives, yet lottery prices do not follow this same pattern. Perceptions on cash, the value of money and instant lottery price points change over the years. From an industry perspective, a $10 wager from yesterday represents a bigger relative bet than today, and that effect strengthens as you go back in time. Thinking about it another way, $10 games are more affordable and accessible to consumers than ever before. Using the Consumer Price Index inflation calculator from the United States Bureau of Labor Statistics, we can quantify the effect. Ten dollars in March of 2019 is the equivalent of $8.40 in March of 2008, and the equivalent of $7.37 in March of 2004. In 2004 money, the $10 product of today is closer in value to the $5 price point than $10. These products are no longer niche and are now far more accessible to the wallets of consumers.

Growth in the $10 category is all the more impressive when you consider the immense rise in revenues from the total category of higher price point games in general. Where lotteries now have increasingly crowded portfolios of $20 and $30 games, the $10 price point is the growth champion. It begs the question, “what’s next?” Is $10 the new $5? One possibility is that $5 games continue to lessen in importance and sales may begin to move from flat to declining in the coming years. The industry must keep a close watch here, as the $5 price point remains incredibly important to the success of our industry and support to good causes.—Written by Cameron Garrett, VP Insights & Analytics, Scientific Games