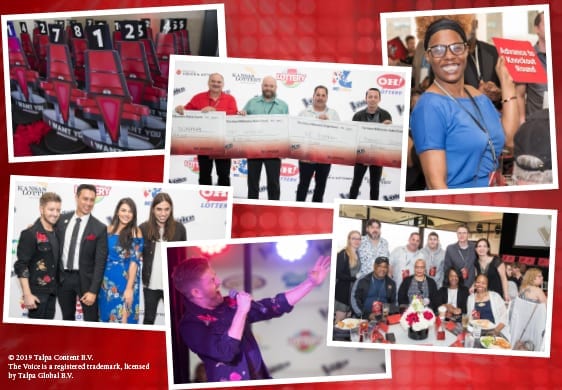 “The Voice Experience” kicked off on May 17 in Las Vegas, where lottery winners and their guests were treated to a welcome reception and tickets to one of Celine Dion’s final performances at the legendary Colosseum at Caesars Palace. From there, the group traveled to Los Angeles, where they took in a Hollywood sightseeing tour, and lottery players participated in a special VIP Millionaire Maker event.

Orchestrated to mimic the rounds of The Voice, the event divided participants into four teams during the Blind Auditions before proceeding to the Knockout Round. Some lucky players advanced to the Battle Round, then to the Chair Spin Round, and ultimately to the Finals, where they competed for the chance to win $1 million – and all walked away with amazing cash prizes. One finalist from Missouri won $40,000, two finalists, from New Jersey and Indiana, won $45,000, and another finalist from Indiana won $50,000.

Two lucky winners of a final drawing were whisked from the event to nearby NBC Universal Studios and seated directly behind the coaches for a prime view of the live finale of The Voice’s 16th season, with performances by celebrity music artists including Taylor Swift, the Jonas Brothers, and Hootie & the Blowfish. The rest of the group attended The Voice Viewing Party at the Sheraton Universal Hotel, where they enjoyed live performances from three former contestants on The Voice and watched the season finale together.

The Voice second-chance promotion was built around IGT’s signature White Glove Service, giving players the VIP treatment and creating a close connection with their lotteries through fun, life-changing experiences.