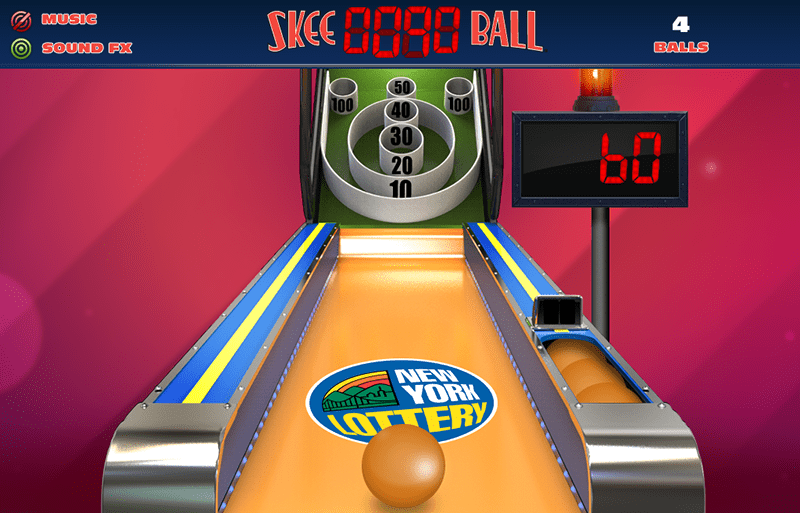 The New York and Connecticut lotteries are rolling out their Alchemy3-licensed Skee-Ball® programs.

The New York Lottery’s Skee-Ball program launched on July 21. “The lottery plans to use the Skee Ball brand on a variety of products in their portfolio including Scratch, a second-chance entry promotion and a play Skee-Ball for fun feature,” said Alchemy3 President Jeff Schweig. “When originally adopted, the lottery felt that Skee Ball was a game that would allow them to physically interact via fairs, festivals and on-site retailer promotions. For now, the grass roots components have been put on hold due to COVID.”

The New York Lottery will use Alchemy3’s web-based interactive game. “It is completely web-based so it can be integrated with any existing app or webpage,” said Ben Nicolls, Director of Marketing & Sales, Alchemy3. “Offering play for fun or prizes is a powerful tool for player database acquisition, social media posts, driving app downloads, driving website traffic and increasing average session times.”

“It is a fun, inclusive brand that resonates strongly with younger demographics,” echoed Nicolls.

The Connecticut Lottery Corp. (CLC) will launch its Skee-Ball program on September 14. “Skee-Ball gives us the opportunity to introduce a fun game with a nostalgic element,” said Pete Donahue, Senior Director of Marketing, CT Lottery. “We are making a concerted effort to offer our players a wide variety of themes and playstyles. The playstyle we chose is a perfect fit for our $3 extended play category.” 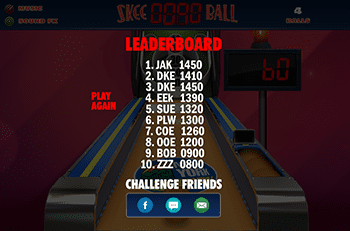 Skee-Ball is a natural for a lottery to build a big comprehensive program around multiple products. CLC will use Skee-Ball as a skin for its Keno game.

“We will be utilizing a Skee-Ball Keno skin concurrent with the scratch ticket,” said Donahue. “The playstyle and visuals from the game make it a great cross-promotional awareness vehicle.”

“As far as Fast Play, we are launching on July 20, and starting with a Progressive Family of games, so it will be too early in the product’s lifecycle to do a one-off cross promotional game between instant and Fast Play. We would have definitely considered had Fast Play been out and established for several years,” said Donahue.

There are no plans to offer a free to play Skee-Ball game. “The CT Lottery is prohibited from offering any digital games,” explained Donahue.

Nor is it likely that the lottery could work with the tournaments. “There are some Skee-Ball leagues in Connecticut,” said Donahue. “Unfortunately, COVID-19 will most-likely prevent us from any tie-in. We may be in a position to look into that in the future.”

Traditionally, U.S. lotteries tie their Skee-Ball products to big events. But many state fairs are being cancelled, along with summer concerts. “We plan on utilizing social media and traditional advertising to promote the game,” said Donahue. “We are currently creating our social media strategy, looking to giveaways and different ways to engage with consumers.”

Alchemy3 has a 10-year history of working with lotteries to launch Skee-Ball products. “The New York and Connecticut lotteries’ launches are on the heels of a successful launch in Pennsylvania,” said Schweig. “Twenty states have run a Skee-Ball program. Many have run two or three times. It keeps growing in popularity. It is expanding into other products in the portfolio.”

Skee-Ball has a proven track record. “Skee Ball is the most merchandised brand in the lottery category,” said Schweig. “The brand has been applied to Scratch, Pull-Tab, Loyalty/Collect N Win, Keno and most recently (Pennsylvania) iLottery.”

Skee-Ball is a recognized brand with cross generational appeal. “Boomers and Gen X see Skee-Ball as nostalgia,” said Schweig. “Millennials and Gen Y are participating in the game via social clubs in bars and restaurants.”

The property’s appeal for lottery marketers is huge. “The possibilities for Skee-Ball are endless,” said Schweig. “The brand can be applied to any product in a lottery’s portfolio and consistently delivers a solid ROI.”

“We feel that Skee-Ball’s brand awareness and recognizable visuals will make this a popular game,” said Donahue.