In its first six weeks of sales, FastPlay games—a new game category for the Connecticut Lottery—generated more than $8 million in retail sales, making it first in the nation (per capita) among the 22 lotteries that currently offer the FastPlay product category. 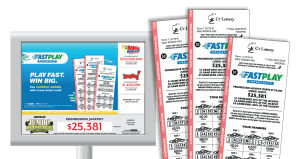 Connecticut launched FastPlay with a Jumbo Bucks Progressive family of $1, $2 and $5 tickets all feeding into one progressive, rolling jackpot. Since launch, players have won in excess of $6 million in prizes – including more than a dozen progressive jackpots wins over the three games.

“FastPlay progressive jackpot games are appealing to our existing players and to potential new players. The speed of play, the instant wins, and the constantly growing jackpot make FastPlay a great addition to our portfolio of games,” says Greg Smith, President and CEO of the Connecticut Lottery. “So far, our results speak for themselves.”

The Lottery has been offering new games that appeal to a broader base of players to responsibly grow proceeds for valuable programs and causes in the state. After a successful FY20 and while experiencing strong summer sales, the Lottery debuted the new category of FastPlay games on July 20.

“New games like FastPlay are truly enjoyed by multiple player segments,” explains Leslie Badger, VP Lottery Content for Scientific Games. “They’re quick and easy to play, and just $1, $2 or $5 gets you in on the fun.”

FastPlay games differ from numbers games because there’s no waiting for a drawing. They print on-demand right from the lottery retailer’s terminal and offer an instant win experience.

Badger shares, “FastPlay games are meant to complement instant scratch games, not replace them. In addition to being sold at the retailer terminal, these games work great in lottery vending machines and even in social establishments that do not offer scratch products.”

“The Connecticut Lottery works hard to contribute over 60% of the states’ gaming proceeds, and we continue to look at new opportunities for increasing those funds,” says Smith.

With FastPlay, it looks like they’ve found a winner that’s here to stay.