Players are embracing moves to deliver more draw game excitement with better odds, bigger prizes, a second chance to win, and the chance to multiply wins. 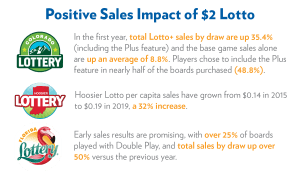 Compared to other games of chance, draw games have traditionally offered a somewhat passive play experience: Consumers buy a ticket and wait for the drawing to find out if they have won. And though this experience has remained satisfying enough to drive positive sales trends for many draw game products in recent years, the category of in-state Lotto games has seen declining sales. Faced with competition from multi-jurisdictional draw games, an array of instant games offering better odds, and other forms of gaming, 16 out of 25 traditional in-state Lotto games experienced decreased per capita sales from 2015 to 2019—with an average decrease of 6.25% across the industry.

To counter this trend, IGT game developers have worked to renew player excitement for the draw game experience. And as more U.S. lotteries move to implement $2 in-state Lotto games in place of the $1 price point, they can now add unique IGT-designed features to Lotto and apply other draw game innovations to increase anticipation and personalization:

In September 2019, the Colorado Lottery debuted a revamped version of its 30-year-old in-state Lotto game, at a $2 price point, to impressive results (see sidebar). Working with IGT, Colorado focused on game mechanics that offered clear player value. The Lottery maintained its starting jackpot levels and drawing dates, while minimally altering the prize matrix to improve players odds. Relaunched as Colorado Lotto+, the game now gives players—at no extra cost—a multiplier between 2X and 5X, randomly selected and printed on each ticket, to apply to non-jackpot winnings, offering a chance at bigger prizes. Additionally, the Lottery and IGT introduced an add-on game, Double Play (branded “Plus” in Colorado), that has been successful in many parts of the world. For the cost of another $1, players can use their same numbers in a second draw for additional prizes, improving their overall odds of winning. The multiplier on a player’s ticket also applies to all Plus prizes except the top prize.

These changes retain the longstanding appeal of in-state Lotto—the chance to win a life-changing jackpot prize for a small investment—while offering players more value, more choices in how to play, and more ways to win. While there are other $2 Lotto products in the industry, the inclusion of these features further supports success. For example, unlike the multiplier offered on Powerball and Mega Millions, the $2 Lotto multiplier is unique to the ticket and is revealed at the point of purchase. This adds an element of anticipation for players, something they report is exciting and worth spending money on along with the chance to win bigger prizes.

The Hoosier Lottery, whose integrated service provider is IGT, made similar changes to the state’s Lotto game in April 2016, achieving a significant lift in sales. Most recently, IGT worked with the Florida Lottery to apply the same successful strategy. On October 8, 2020, Florida re-launched its Lotto game at a $2 price point with an embedded multiplier between 2X to 10X and the $1 Double Play add-on.

Extending Times to Play and Ways to Win

IGT draw game analysts are also working with lotteries to move early draw times to later in the evening, a change some lotteries have recently implemented with success. Such a move provides more time at the end of the day for players to make a purchase while giving lotteries a larger sales window prior to a draw.

IGT’s patented CASH POP™ game is a flexible new draw game featuring unique mechanics that let players strategize their wager and create their own experience every time they play. IGT research has found that the ability to customize the play experience especially appeals to younger demographics. NASPL recently recognized the Georgia Lottery Corporation for its implementation of CASH POP™ with a 2020 Buddy Roogow Innovation Award for Best New Draw Game.

IGT also continues to work with customers on the implementation of add-on features to existing traditional draw-based games with the goal of further enhancing the player experience and, in some cases, fulfilling a new promise that the base game cannot offer. These include IGT’s proprietary ezMatch game along with the IGT-developed Double Play, Xtra, and Fireball concepts.