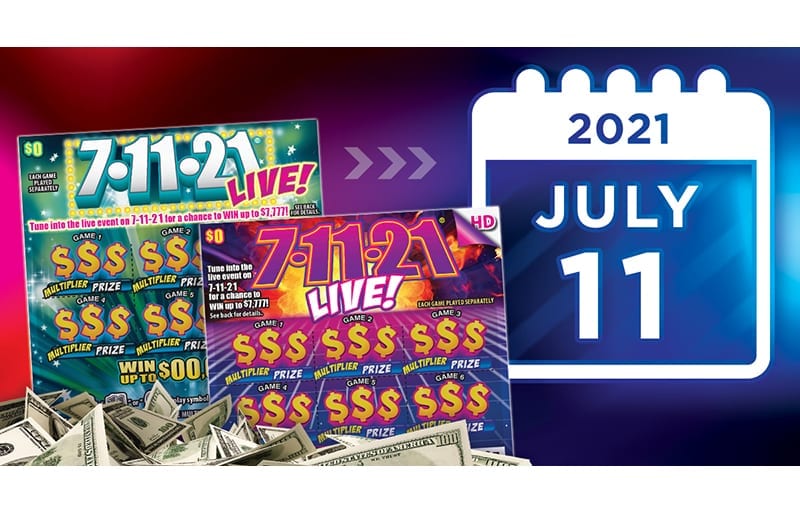 Scientific Games created a multi-lottery 7-11-21 LIVE!® Game which will culminate with a Facebook Live Event on July 11, 2021. So far, six U.S. lotteries are planning to launch this multi-state $2 instant (scratch) game in 2021, including Georgia, New Hampshire, North Carolina, Pennsylvania and West Virginia.

“Believe it or not, this all started before the pandemic struck,” explained Amanda Saferin, Director, Product Marketing & Brand Integration at Scientific Games. “We have a trademarked 7-11-21 game, which is widely popular. We saw these dates were coming up. It’s a once-in-a-lifetime game.”

The inspiration for the game dates back to 2019 when Scientific Games began researching how to celebrate its popular 7-11-21 trademark in a big once-in-a-lifetime way and give lotteries a great reason to celebrate with their players.

“We knew that the 7-11-21 theme was popular, along with Lucky 7s. But we wanted to make sure, so we conducted a survey with our OneVoice™ platform in December 2019,” said Saferin. “There are about 1,900 lottery [and casino] players on this national panel. Most are scratch players.”

The results showed players embraced a program featuring lucky numbers seven, 11 and 21. “Panel results showed 55% of participants considered the numbers to be lucky and 47% indicated they would buy this instant game and tune into this live promotion. When you compare those numbers to the typical participation rate for a second-chance promotion, it is about double,” explained Saferin.

Scientific Games’ next step was to build the multi-jurisdictional program, then meet with customers. “We wanted to keep it simple for us, for our account teams and for the lotteries’ staff who execute. We have continuously refined this promotion,” said Saferin.

Saferin describes the 7-11-21 LIVE! as “linked game lite. Scientific Games pioneered linked instant games in 2007 so we are using 14 years of expertise to create live events. Bringing all these lotteries together, we focused on the most popular live streaming social media channel. We chose Facebook to stage the event.”

The new game offers a great way for lotteries to boost their social media following on Facebook. Players tune in and comment with their lucky numbers. The 7-11-21 LIVE! Facebook Live event will offer a chance to win one of three prizes: $77, $777 or $7,777. Participating lotteries can stream the live broadcast through their Facebook page, arranged in advance by Scientific Games.

In terms of the size of the live Facebook audience, it is difficult to estimate. “Lotteries vary with their live streaming giveaways,” said Saferin. “They have ranged from 1,500 viewers to almost 700,000. It definitely reflects the prizes and publicity and the number of followers. The instant game will be out on the streets [early in 2021] so it will drive people to their lottery’s Facebook page. We are supporting it with a digital package for each participating lottery.”

Scientific Games is willing to work with lotteries if they want to support it more or in a different way. “One thing we learned early on working in this industry is ‘one size does not fit all. Every lottery has slightly different objectives and regulations, and ways of doing things. We structured this program to keep it flexible, yet cost-efficient. It’s one live broadcast that is streamed through each lottery’s Facebook page,” said Saferin.

The 7-11-21 LIVE! ticket features high-definition play symbols produced by Scientific Games’ advanced HD Games™ manufacturing technology. This is a big plus at retail where the $2 game will stand out.

This popular theme $2 game will almost certainly improve sales for lotteries’ low price point instant games. “Any support is going to help $2 sales. Since 2005, there have been 301 launches for a 7-11-21 theme at $1 and $2 price points. These 7-11-21 games have generated over $2.6 billion in [cumulative] retail sales. This is a logical way to support the $2 price point,” said Saferin.

Scientific Games pioneered the concept of blockbuster, multi-state winner events for the lottery industry. The company debuted the industry’s first linked multi-state instant game, DEAL OR NO DEAL™, in 2007. It established a whole new genre in scratch games. Since then, Scientific Games has managed and produced more than 10 events since, including its BILLION DOLLAR CHALLENGE® events in Las Vegas tied to the WILLY WONKA GOLDEN TICKET™ linked instant game.

“I think this is going to be the first of many such [linked lite] events,” predicted Saferin. “We are already looking at our second event, something simple and impactful. We have so many opportunities with our portfolio of licensed properties and all our themes. We are really trying to create an all new category.”

All ® notices signify marks registered in the United States.