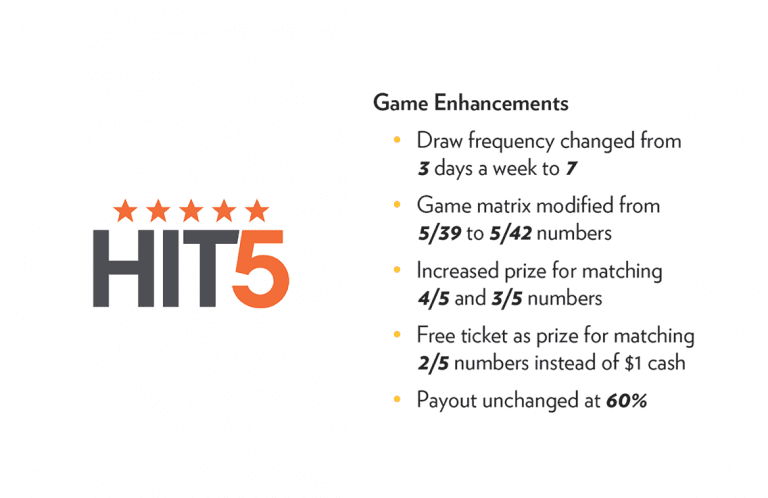 Generating excitement for new lottery games and features is more important than ever as operators look to engage players and support retailers in the long exit from the pandemic.

Washington’s Lottery accomplished this goal and more with recent enhancements to its draw game Hit 5.

Since the refreshed game went live on August 30, 2020, player enthusiasm for the changes has resulted in a whopping 80%+ increase in daily sales. Ultimately this will contribute more dollars to a key lottery beneficiary, the Washington Opportunity Pathways Account, which goes toward helping students achieve their higher education dreams and supports early childhood-education learning programs.

How did Washington do it, and how can other lotteries evaluate draw-game changes to fuel success?

A popular game at three draws per week since its launch in 2007, Hit 5 was still producing significant revenue (~$22 million per year) before the enhancements, though sales growth had been nearly flat for several years. With any popular game, there can be a natural reluctance to make changes for fear of a negative reception from players and retailers. But by applying analysis and prior learnings to make the right changes, the process can lead to even greater wins for players, retailers, operators, and beneficiaries.

Washington’s Lottery accessed input from IGT teams with specialized experience in shaping and modeling the possibilities for draw-game optimization, and extensive knowledge of changes that have been a hit with players in other jurisdictions.

“We wanted to balance out our portfolio and do as much as possible to enhance the draw games, because our instant games already do so well,” said Marcus Glasper, Director, Washington’s Lottery. “It was an opportunity for us to not only increase sales but offer more to players. IGT teams brought ideas and modeled specific changes to predict performance, from the amount of sales for the first draw to the number of winners expected per year, and much more.”

Ultimately, the Lottery chose to expand Hit 5 to seven draws per week and made other enhancements to the game (see sidebar), all at minimal disruption to players.

“Now we have a daily game that players love, with the same starting jackpot of $100K, but one that grows quicker than ever because it is incrementing on a daily basis,” said Glasper. In fact, the first jackpot roll after the enhancements resulted in a million-dollar winner. And since August 30th, the jackpot has been won 14 times with two wins over $1 million. The average jackpot win is now $477,000 (versus $188,000).

Lotteries partner with IGT to evolve the draw-game portfolio in a number of ways. “Sometimes new games will accomplish the objective that a Lottery has in mind,” said Brad Heathcote, IGT Senior Manager Game Development and Portfolio Management. “In other cases, we might recommend increasing the number of draws or increasing the matrix size, as Washington did with a player favorite like Hit 5.”

Washington’s game changes involved a new play slip that had to be distributed to the retailer network. Retailers also needed training on how the new game operates. “IGT was there for our Washington partner every step of the way, from the initial meetings with IGT subject matter experts and the same store sales team, to the design of the final structure, to collaboration with the Lottery on the successful delivery and execution,” said Shannon Struemph, IGT Account Development Manager. The Lottery’s retailers are also supported by the extra traffic generated by the new game.