SLINGO Gets Lots of Love from Lottery Players 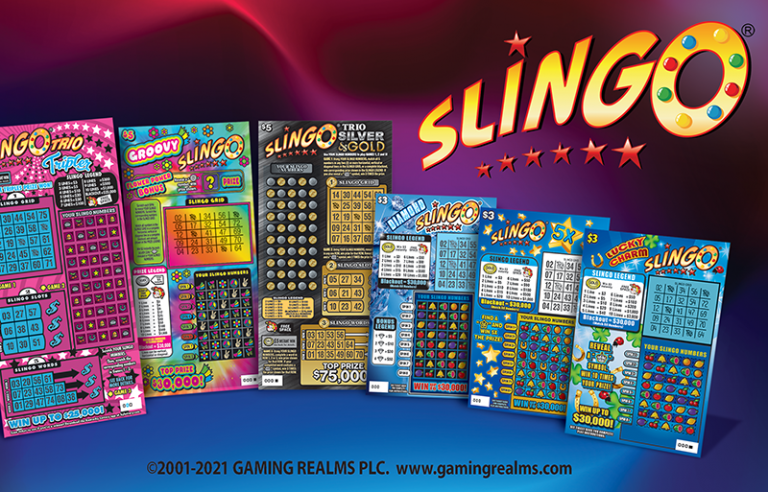 One of the most classic gaming brands of the last several decades is getting more love from players than ever. SLINGO®—a combination of favorites bingo and slots—remains one of the hottest brands for lottery games since it came to life in 1995.

“SLINGO is slots and bingo. It’s two popular games in one and players love the simplicity of it,” said Liz Johnson, Director of Lottery Licensed Properties for Scientific Games.

SLINGO was created by Sal Falcigia Sr. in his basement as a slot machine and today, his grandson Craig Falcigia manages the brand for licensor Gaming Realms. It’s been in the Scientific Games portfolio since 2000, finding a niche at the $3 and $5 price points. It is consistently a top performing brand globally.

The fun, branded games remain a perennial staple in many U.S. lotteries’ game portfolios. Among the biggest fans are Arizona, Minnesota, Montana, Washington and Wisconsin. Idaho launched its 75TH SLINGO instant game in 2021, with other lotteries stacking up 30+ or even 50+ editions over the years.

“I learned a long time ago, find out what people want and don’t take it away. SLINGO is one of those things. It has a loyal following among Idaho Lottery scratch game players. We have a long history with SLINGO, introducing our first game in January 2003,” said Jeff Anderson, Idaho Lottery Director. “Idaho was the first state to launch a $5 SLINGO game. Eighteen years and 75 different versions of the game later, we always try to keep at least one SLINGO game at $3 and $5 in the marketplace.”

By the numbers, some 350 SLINGO branded lottery games have been launched by 40 lotteries around the world with 550 million tickets sold valued at more than $1.7 billion. The brand is often featured using various themes for extended play instant scratch games, which have increased in sales by 26% over the past year. Retail sales of SLINGO branded games are up 87% (May 2020 to May 2021).

“Montana has collaborated with Scientific Games to design and produce countless SLINGO branded games over our history. The extended play style of both our $3 and $5 SLINGO games has a loyal and consistent following.  We like to call this play style “bingo with a spin” because it gives players that extended play experience with added levels of multiple chances to play,” said Jay Boughn, Instant Product Manager for the Montana Lottery. “SLINGO has always been a staple in our extended play category and will continue to be a part of our game line up for years to come.”

Boughn said that a few years ago, the Montana Lottery added the $5 SLINGO TRIO to its portfolio, and it has steadily gained appeal at that price point.

“Fans of extended play games in Arizona have been enjoying SLINGO for several years now,” said Chris Rogers, Deputy Director of Marketing and Products for the Arizona Lottery. “Our $5 SLINGO TRIO game continues to perform well through the pandemic with a 20-week index of 124 [24% better than other $5 games].”

Scientific Games credits the brand’s strength to the crossover of casino slots and lottery instant game players. The company’s ONE™ player segmentation study cited that 74% of slots players play instant games and 50% of instant games players play slots. With 20 million players new to lottery in the pandemic, it’s no wonder SLINGO is enjoying popularity. Several lotteries have re-ordered quickly in recent months.

“Licensed branded games like SLINGO offer exciting entertainment for players new to lottery and they keep our existing player base engaged. Working with Scientific Games, we have added some very strong SLINGO games to our portfolio, and they are proving to be popular with Minnesotans,” said Wes Harms, Director of Operations for the Minnesota Lottery.

The company just extended its agreement with Gaming Realms plc for the exclusive rights to offer the iconic SLINGO brand in lottery for instant, terminal-generated and drawing-based games for four more years in the North American, UK, European, New Zealand and Australian markets. In addition, Scientific Games has the opportunity to offer SLINGO branded digital lottery games.

“Our first SLINGO game launched in late 2003, and it is the best-selling $3 game in Washington’s Lottery history,” said Gaylene Gray, Product Manager for Washington’s Lottery. “Our players love the playstyle of the game and the available add-ons are a fun ‘plus’ to the standard game. SLINGO is a staple in our product line, and we always have a game in the market.”

All of the SLINGO iconic symbols were refreshed in 2017 by Gaming Realms. Symbols such as the joker, devil and cherub characters are sometimes incorporated into the game titles like Little Devil SLINGO. The playstyle lends itself to extended play games, which nearly every lottery features. The games also include an instant win feature for players to win an instant cash prize.

“The newer SLINGO symbols are fresh, full-colored, more detailed and just plain fun,” explained Johnson. For that reason, Scientific Games is currently testing new SLINGO games with its HD Games™ manufacturing technology that will make the symbols high definition and vibrant. Games featuring other Strategic Product Enhancements like Scratch My Back®, Micromotion™, foil and holographic are also in development. “We have big plans for SLINGO in the future.”