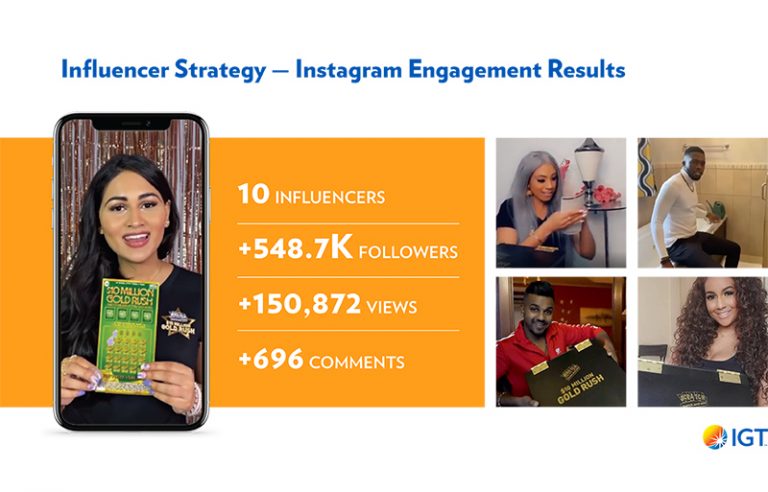 Taking a creative and progressive approach to marketing led to instant success for the National Lotteries Control Board of Trinidad & Tobago (NLCB). An extended launch campaign for the NLCB’s new $10 Million Gold Rush instant game invited social media influencers into the marketing mix for the first time, helping the Lottery quickly and cost-effectively exceed its launch targets.

“This new approach sought to achieve record revenues while providing significant savings to the NLCB’s sales and marketing budget, as well as to reach a new, younger demographic,” said Camille Forde, Director of the NLCB.  “With the help of our partners at IGT, we accomplished those ambitious goals quicker than even anticipated.”

“The campaign came about in joint conversations between NLCB and IGT, conceived in what we saw trending beyond the lottery space,” said Kirk Rampersad, IGT Marketing Manager. IGT is the NLCB Lottery services provider and manages the lottery’s sales and marketing.

To extend awareness of the new TT$50 game, which launched in January, the IGT team worked with the NLCB and its advertising agency to identify, screen, and engage local social-media influencers from the fields of music, comedy, beauty, fashion, and current affairs.

The 10 approved influencers and 15 voluntary media personalities received a premium press kit filled with themed items to support “unboxing”-style videos and other social media content about the game, posted from February 22 to 26. The posts were managed closely, and NLCB and IGT had agreements to approve messaging prior to going live.

The novel approach paid off as the NLCB exceeded its goals for market penetration, activations, average weekly settlements and more. The cost of the paid influencers was about one-fifth the cost of traditional media driven awareness, and the game received additional attention from the key media personalities who posted on their personal social media.

No instant ticket product can attribute its success solely to one element. The efforts of the team to produce a highly attractive prize structure, further improvements to the distribution approach, and the use of IGT’s Glam™ feature were also aligned to make this game a hit. Printing the ticket with Glam™ was a cost-effective means to create a superior look and feel, adding a fifth dimension of metallic shine overlaid with color for a brilliant foil appearance on traditional paper stock. Enhancements like Glam™, along with the company’s two newest printing features, Gleam™, IGT’s cold-foil technology, and Playback™, IGT’s double-sided printing technology, give IGT designers powerful tools to create new hit games like $10 Million Gold Rush – with much more to come.