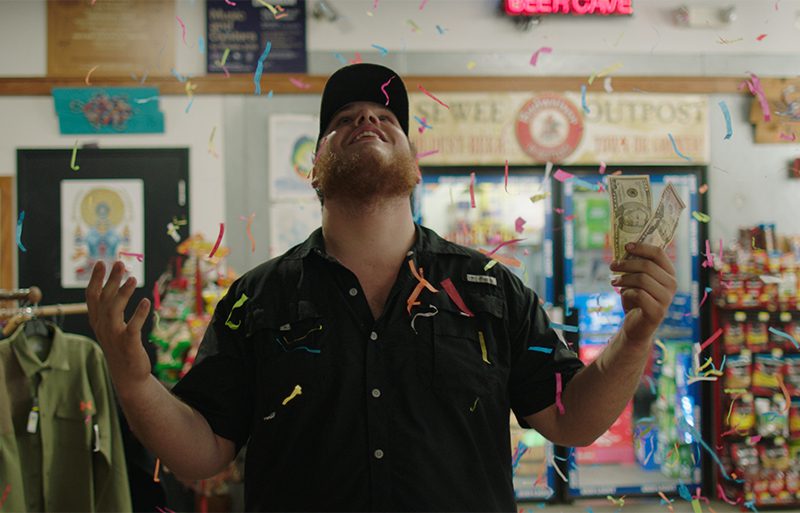 Atlas Experiences, LLC and Luke Combs have entered into an exclusive partnership to offer North American lotteries Living Lucky with Luke Combs, a multi-state linked instant game promotion. The second-chance promotion is designed exclusively for lotteries across North America to participate in this once-in-a-lifetime concert event to offer their players a chance to see Luke at the Ryman Auditorium and a chance to win $1,000,000 awarded by Luke.

“We are thrilled to be able to have this exclusive partnership with Luke Combs. Together we have crafted a program with elements that has never been done before, like being the first to award a $1,000,000 in the Mother Church of Country Music, Nashville’s historic Ryman Auditorium, during a private lottery concert,” stated Derek Gwaltney Founder & CEO of Atlas Experiences. “Luke is one of today’s most influential country stars and his popularity is the perfect formula for an amazing second-chance lottery promotion. It’s like capturing lightening in a bottle— When Luck Rains It Pours!”

The multi-state linked instant game Living Lucky with Luke Combs can be offered by participating lotteries from across North America at a $5, $10 or $20 ticket price. The private concert event—held at a to-be-announced date in 2023—will be anchored by a 75-minute money-can’t-buy Luke Combs concert at the iconic Ryman Auditorium. Gwaltney said there is a cap of 400 trips to be awarded. Every participating lottery will have a minimum of one $10,000 winner.

Luke will host an exclusive meet & greet prior to the concert for 20 lucky guests. During the show the winning opportunities continue as $10,000 winner(s) will be announced between each song with at least one guaranteed winner offered by participating states. All winners will be eligible to win the top prize of $1,000,000 to be awarded by Luke at the conclusion of the show.

Gwaltney said Combs will attract a younger demographic and inspire them to play lottery. “Luke Combs has over 8.5 million followers on Instagram, Twitter and Facebook, mostly in that demo of 18-34.  Combs actively engages with his fans and followers, and that’s why we have made social a huge part of the value of the promotion. Luke will be personally engaged with the promotion to include a dedicated post for every participating lottery, launch press releases and interviews with the first contracted lotteries. Atlas will produce a 30-second TV spot that the lotteries may use as part of their paid media strategy or across social media. The opportunity for Luke to promote the private concert at the Ryman Auditorium and the $1,000,000 prize to his fans is truly a money can’t buy experience. I am really excited about the augmented reality strategy created to have an even more personal connection with Luke as he will announce the start of the promotion, congratulate winners and welcome them to Nashville all through AR Innovations. How amazing is it that Luke Combs is going to tell you when you win with a custom message on your phone,” said Gwaltney.

The personal connection to lottery scratcher tickets is showcased in Combs’ runaway hit, “When It Rains It Pours,” featuring Combs as he sings about winning a $100 scratcher lottery game. The video is wildly popular on YouTube with over 288 million views.

Lightning In A Bottle

The vision and structure of the program is designed to produce a variety of results. “This is lightning in a bottle. This is a rising star who experts are comparing to Garth Brooks, just as his stadium tours start in September. He is selling out 30,000 seat venues a night,” said Gwaltney. “From the player perspective, if you are a Luke Combs fan, think of being in a room with 400 to 800 other super fans up close and personal, after every song somebody is going to win $10,000 and at the end Luke will award $1,000,000 to one of the lucky winners from lotteries across the country.

“Luke Combs has had a record breaking 11 consecutive number one singles from just two albums since 2017. He has had over 11 billion streams of his music and is one of the top country artists today,” added Gwaltney

The program will have multiple events for winners to have a unique and unforgettable experience during the 4-day program in Nashville. In addition to the marquee concert with Luke, there will be a Spotlight Concert at CMA Theater in the Country Music Hall of Fame and Museum (line-up to be announced) with a private reception and access to the museum and a lunch buyout at Martin’s Bar-B-Que Joint with all winners receiving exclusive Living Lucky with Luke Combs merchandise and a Music City Total Access Pass.

“I’m thrilled to be part of this promotion and can’t wait to announce Living Lucky with Luke Combs to my fans. I’ve always wanted my own scratch ticket and the day has finally come,” stated Luke Combs. “The fact I get to give away a million dollars to someone in the audience at the Ryman is beyond exciting. I love that I will have the opportunity to personally change someone’s life right there in that moment.”