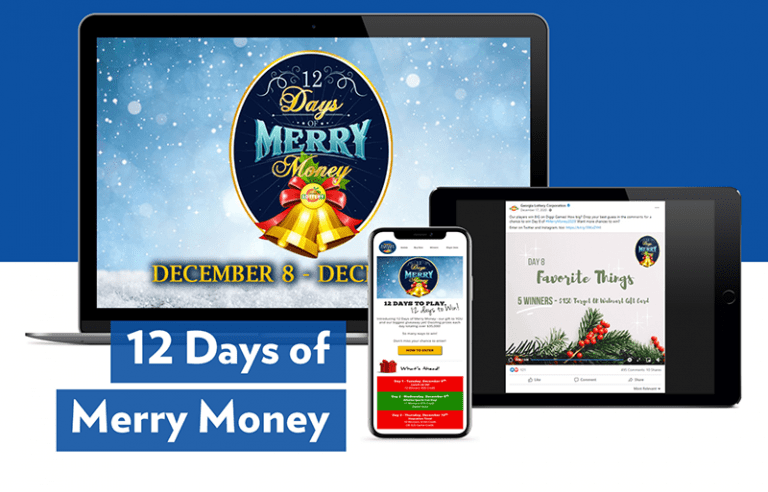 With about 20 weeks until the festive season, many Lotteries are planning their holiday marketing. Among those factoring the digital channel into the mix is the Georgia Lottery Corporation (GLC), whose iLottery program began in 2012 and since 2014 has featured the GLC’s branded instant-win Diggi Games.

One successful, recurring iLottery campaign is the GLC’s 12-day holiday contest, designed both to thank the Lottery’s current Players Club members and to engage new players.

“Now in its fourth year, ‘The 12 Days’ holiday-themed campaign is one of the most popular promotions the GLC runs each year,” said Andrea Williams, IGT Senior Manager, who leads the dedicated IGT marketing services team that supports Georgia’s digital channel, working collaboratively with the Lottery to formulate and execute iLottery marketing strategy, creative, implementation, and analytics.  “Last year, we changed the name of the campaign to “12 Days of Merry Money” based on survey data, added new ways to enter, and increased the total prize pool to keep it fresh but still true to the spirit of the campaign,” said Williams.

Among other improvements that garnered great results, the GLC and IGT teams adapted the campaign to offer virtual prizes, and each day featured a different theme, such as “Spruce It Up!” and “Date Night.” Winners also had the option of selecting a themed gift card. For example, “Spruce it Up!” winners could choose between a $150 gift card to Home Depot or IKEA. With 12 different themed days and gift cards, there was something for everyone.

Through email and social media, players gained chances to win daily prizes, earning entries for taking surveys and quizzes, by playing instant-win Diggi Games, and via social engagement. Emails had a 49% open rate and a 3x increased click rate, garnering $1.4M in wagers from the email campaign alone. “The GLC has a very active Facebook page, but we were happy to see more than 650 players comment about their favorite holiday treat on a single post to earn entries,” said Williams.

Also, players had a voice in shaping the campaign by taking a survey. One piece of data highlighted what kind of prizes GLC’s players wanted and the frequency of the drawings. This data was used when selecting the gift cards used in the campaign.

Four of the GLC’s Diggi Games were spotlighted during last year’s campaign. “Because Diggi Games are a core element of the iLottery program, we wanted players to earn entries for their game play,” said Williams. “Over the course of the campaign, the four Diggi games highlighted in the daily emails were among the highest-performing Diggi games each day. In fact, the day Fortune Skies was featured was the highest revenue day for the entire campaign.”

“We found the ‘12 Days of Merry Money’ the perfect promotion to thank our players for their continued support of the Georgia Lottery, our HOPE scholarships and Pre-K Program,” said J.B. Landroche, GLC Senior Vice President of Corporate Affairs.  “IGT’s marketing services team is one of the keys to the success of this annual campaign.”