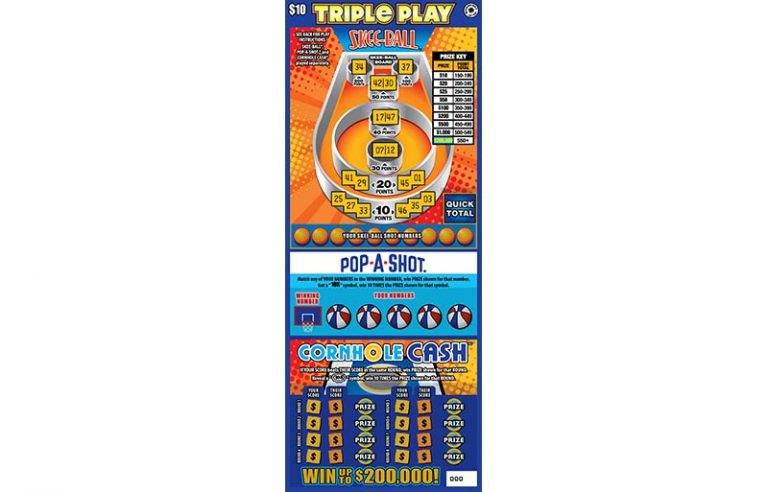 “Our clients love Skee-Ball,” explained Alchemy3 President Jeff Schweig. “Most of the lotteries which have run Skee-Ball have done very well with the program. We’ve stretched SkeeBall across the portfolio. But then the client came back and asked us when it comes down to the game itself, what can we do to make Skee-Ball bigger and better—basically the next rendition of it. So we put our heads together and said what if we put multiple games on one ticket?”

Alchemy3 decided that putting three licensed arcade games on one ticket would make it 3X popular as a $10 price point. “Each game featured is popular, portable, and family friendly—perfect for interactive experiences at live events,” said Schweig.

Washington’s Lottery was sold on the Triple Play concept. “When Alchemy3 showed us the three different arcade games we were intrigued, but not sure that each game could stand alone. Alchemy3 showed us a concept with two of the games on one ticket, and we were curious to see if all three games would fit on one ticket. The name Triple Play was recommended by Alchemy3 and after much discussion, we decided to use the name,” said Randy Warick, Assistant Marketing Director, Washington’s Lottery.

The next challenge revolved around creating a ticket featuring arcade game properties. “We worked with Alchemy3 and Scientific Games to design a ticket that kept the fun playstyle of Skee-Ball while adding Pop-A-Shot and Corn Hole. Our one requirement was that the ticket needed to be 10 inches long to help with placement in our vending machines,” said Warick.

The tall ticket mimics the feel of a typical arcade game. “Win up to $200,000!” is listed prominently. “It’s beautiful,” said Schweig. “And the cash callout in the game title maintains core appeal.”
Warick said it was a big leap to jump to a $10 price point for a licensed game. “We usually offer licensed games at $5, but given the multiple games and play value, we are confident that Triple Play will work at the $10 price point,” he explained.

Washington’s Lottery uses a 26-second still video to showcase the fun of the three arcade games. In rapid succession, the video showcases a familiar graphic that embodies the playstyle of SkeeBall, Pop-A-Shot and Cornhole Cash. The final screen delivers the payoff—“3 Great Games! Triple The Play, Triple The FUN! Win up to $200,000!”

The Triple Play ticket will be prominently marketed at self-service retail lottery locations. “We will be supporting this ticket mostly through our attractive show for the lottery vending machines,” said Warick. “With that said we will have some support on our social media channels but our thought process is by using the vending machines at the point of purchase we have a better opportunity to encourage play.”
Washington’s Lottery expects the fun playstyle will also produce strong sales. “We don’t use sales index in our evaluation of Scratch games, but we anticipate that Triple Play will be one of our top performers in late FY21 and early FY22,” said Warick.

The lottery does not plan to offer physical summer events themed around these arcade games. “Our summer event schedule is still very fluid due to COVID-19 recommendations. We are currently evaluating our promotions for the state fair this fall,” said Warick.

Using licensed properties as themes for scratch games is key for Washington’s Lottery. ‘We are interested in licensed products that fit current trends and/or have nostalgic content. Having licensed games in our portfolio gives us something to talk about across our marketing channels, and our players recognize and identify with the licensed game and are interested in playing the Scratch ticket,” said Warick.