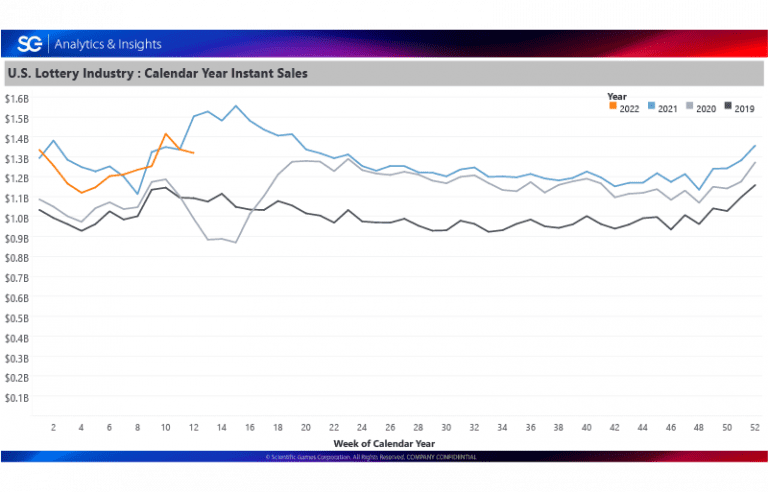 By the 2nd quarter of 2021, the U.S. economy had recovered to its pre-pandemic GDP levels, surpassing all expectations formed at the onset of COVID-19. Around this time, the lottery industry had one of the largest multi-week sales periods in its history. “One thing that people often forget is that March is one of the peak seasonality points,” Cameron Garrett, VP, Analytics & Insights, Scientific Games, said.

Yet, historically, this sales fluctuation lasts two weeks. In 2021, it followed this same trend but dramatically accelerated for another five weeks. Year-over-year instant game sales jumped by 37% during calendar weeks 8-15. The growth is even more spectacular because of the dip in sales in 2020. Sales growth from 2019, which was 29%, confirms the abnormality in 2021.

The industry is curious if it will have a similar period of success this year. “That’s what everyone is uncertain of right now. They’re wondering what’s going to happen,” Garrett said. “There’s global instability with Ukraine and U.S. inflation, but there’s also not a global shutdown. I think the idea we’re going to see sales just spike and go through the roof over the next two months is likely not a reality.”

As wonderful as it was, the surge in sales put lotteries under a lot of pressure this year to keep up. “But exciting things are happening in the industry, particularly the $50 game launches, which are affecting retail sales very positively. And that’ll certainly be a big driver of 2022 and the second half of the fiscal year for most lotteries.”

The industry has seen an embrace of higher price point products from its players over the past two years. This can be primarily attributed to consumer preferences changing. “Recent primary research demonstrates this—the chance to win big prizes is becoming more important than ever. “ ‘Low-cost’ products used to be ranked as relatively more important than ‘big prizes’, but this has since changed,” Garrett said.

The shift in importance is mainly attributed to the exciting prize structure and multi-million-dollar prizes. There are some consequences to introducing the new price point. “For the most part, the revenue growth is incremental overall, but lotteries are going to be cannibalizing some of their $30 game sales and even some of their $20 game sales. Ultimately the person playing the $30 is likely to be the same person who’s going to go out and buy the $50,” Garrett said.

Lotteries must weigh the pros and cons of introducing the new $50 price point. “My caution is that it has to be a natural jump,” Garrett said. “Lotteries should reach a certain maturity level with their instant category before launching the $50 to maximize sales. They must know if their market is ready.” 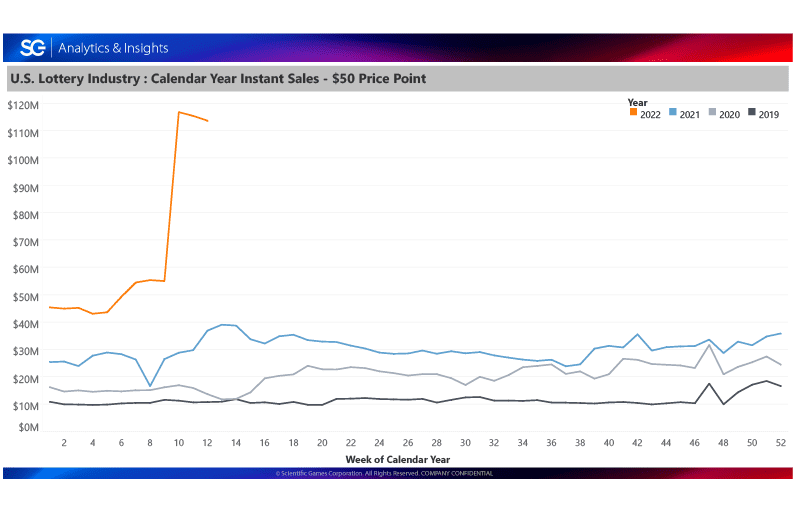 The answer is a resounding yes for many lotteries, whi

ch is why so many are producing record sales numbers. The Analytics & Insights team at Scientific Games tries to determine precisely the best time is to introduce a new price point. Since launching a new price point is a tool a lottery can only use sparingly, choosing the right time to launch is critical. “We use analytics to answer: ‘Would a lottery achieve similar results by launching another $30 instead of a $50 game?’’ Garrett said. “When should a lottery launch a $50 game? For instance, a lottery shouldn’t launch a $50 right on top of a recent $30 launch.”

As higher price points succeed, the industry has witnessed lower price points flounder. $1 and $2 instant games are fully matured products, where their short-term and long-term growth are both trending downward. “I think at this point it’s all about how to maintain a steady maturity and find a way to embrace them without putting too much product out there,” Garrett said. “One of the risks that I see with the industry becoming overly reliant on higher price point products is that it may sacrifice playership levels. Our goal is to make sure the lottery maintains a healthy and balanced portfolio.”

Some lotteries, like OLG, have phased out $1 games. Other lotteries have chosen to have lower price points, or ‘base games’, which are always on sale. What’s the right strategy? It’s vital to understand how the various stakeholders in the value chain interact with lower price points. For retailers, lower price point games can be a pain to deal with, and for consumers, they have a less exciting play experience due to the lower prize payout. On the other hand, they are an excellent introductory price point for new players, and for lotteries they add more to the bottom line than their higher price point alternatives.

Lotteries are faced with a difficult strategic choice with the future of these games. “If I’m a lottery product manager, I need the confidence that I’m going to be able to make up the lost GGR generated by those games. That’s where we need marketplace testing that should be informed by research and data analytics,” Garrett said. “It is an exciting time, and the rest of the industry will be learning from some of the market leaders who do make those decisions.”