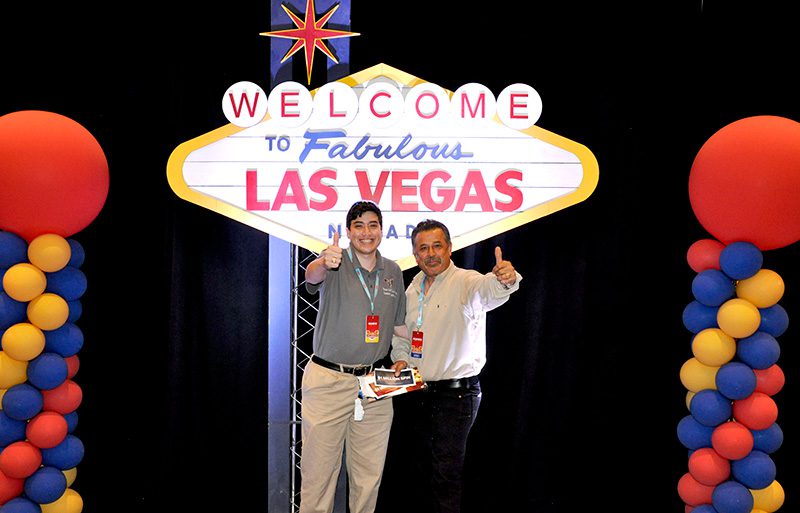 When it comes to hosting lottery winners’ events, the wow just keeps getting bigger and better for the team at Scientific Games that’s traveled coast to coast for the last 15 years making it all happen.

Since the first DEAL OR NO DEAL event in 2007, which sent 100+ lottery players from across the U.S. to Hollywood for a game show-like experience, Scientific Games has produced 30 major events for more than 3,000 winners. The productions have taken cross-company teams from Las Vegas to Los Angeles, Orlando, Chicago, Boston, New York City, and back again.

“We created very valuable opportunities for lotteries to offer once-in-a-lifetime events with white glove service to their players. And we’ve fine-tuned the events over the years into amazing winners’ experiences that can’t be bought or replicated – even by six-figure prizes,” said Jeanna King, VP of Creative Engagement & Events at Scientific Games. “Giving players that exclusive, personalized experience is a differentiator for us – from the moment a winner is notified, to the moment they board the plane home.”

Of course, many of the events had star power from the start. Almost all were tied to beloved licensed brands like WILLY WONKA. Many connected players from a game sold at retail to a digital promotion. All led to an exciting second-chance opportunity to win a trip to an immersive event and the chance to play for big prizes.

“The chance to win up to $1 billion in the WILLY WONKA GOLDEN TICKET game’s BILLION DOLLAR CHALLENGE was truly mind-blowing for players. A lottery event with a top prize like this had never been offered before,” said Laurie Hayes-Scata, Grand Prize Fulfillment Manager, who vividly remembers the excitement in the air when 200+ trip winners arrived at the events in Las Vegas.

Both Hayes-Scata and King have been involved in perfecting the production model Scientific Games follows, beginning with the company’s very first winners’ event. For the BILLION DOLLAR CHALLENGE, they worked closely in partnership with Warner Bros. Themed Entertainment to create and execute a fully immersive brand experience from start to finish.

“It was WILLY WONKA everywhere the winners turned at the events, from the sign-in table to the stage set, to the event props and all the promotional items the winners received,” said King. Scientific Games produced a second WILLY WONKA-themed event, the EVERLASTING MILLION CHALLENGE in September 2022. Both events topped the list of linked game successes.

Major promotional events tied to brands include DEAL OR NO DEAL, JAMES BOND, MONOPOLY, and THE PRICE IS RIGHT – highlighted by the most recent COME ON DOWN Challenge. The next big linked instant game is under development and will remain top-secret until unveiled to lotteries later this year.

Other favorites are the WAREHOUSE DASH, where winners have 90 seconds to run through a merchandise warehouse and fill their shopping carts, and the $5 MILLION VEGAS CHALLENGE, so popular it’s been produced three times for Texas players.

While every group of winners and their needs are unique, the team recognizes that personalized ‘concierge’ service has come to be expected by more and more consumers in recent years. And in this case, it translates to trust and building loyalty to a lottery’s brand.

“No matter the size of the event or the city, our personalized service is what makes the difference. It’s Scientific Games employees, not a third-party event company,” explained Hayes-Scata. “Sometimes we’ve been talking to winners for two years by the time the game wraps and the actual event takes place. We really get to know the winners. We know if they have any special needs or requests ahead of time, and we know those who might need extra attention.”

Some of their extra touches have included securing interpreters, accommodating wheelchair-bound winners, catering to those anxious about air travel, and arranging for special dietary needs. Then there’s giving driving directions in unfamiliar cities, over-communicating when and where winners need to be, managing ‘shenanigans’, wiping tears of joy, and more handholding. Literally.

Over the years, there’ve been many heartfelt stories and memorable moments. To King and Hayes-Scata, it means being known on a first-name basis, getting a call when a winner’s new baby is born, photos of pets and weddings, and lots of thank-you notes and hugs.

Best of all, the entire Scientific Games team becomes each winner’s very own cheering section, joining in the spirit of the event screaming with excitement and clapping along with all the other winners at the event for the lucky who advance to grand prize opportunities.

“Scientific Games views the winners as our customers’ customers,” says King. “So, it’s white glove all the way. That’s just the way we do winners’ events.”